Labor led by Anthony Albanese was projected to win enough seats to form a government in Saturday’s election, even if it falls short of a majority in the 151-seat parliament, according to the Australian Broadcasting Commission (ABC). The broadcaster said the opposition party had won at least 72 seats, compared with 55 for the Liberal-National Coalition led by Morrison. Small parties and independents had 11 seats, with 13 others still to be declared as of 8.30pm Bangkok time.

Morrison announced he would resign the Liberal leadership, saying he took responsibility for party colleagues who had lost their seats, and for loss of the government.

Still, it wasn’t all good news for Labor. The party only won about 31.7% of the primary vote on the latest count, which would be its worst result in decades and the lowest margin for an incoming government since the end of World War II.

Both parties lost votes to small parties and independents, including Zoe Daniel, a former ABC journalist who served as Southeast Asia bureau chief in Bangkok from 2010-13. She won handily in the formerly “safe” Liberal seat of Goldstein in Melbourne.

The balance of power could yet rest with other climate-focussed independent candidates like Daniel who routed Morrison’s Liberals in a string of once-safe conservative urban seats.

Their success came after three years marked by a pandemic and climate-worsened bushfires, drought and floods that upended life for millions of Australians.

“People are saying the climate crisis is something they want action on,” said an elated Australian Greens leader Adam Bandt.

“We have just had three years of drought, and then fires and now floods and then floods again. And people can see it, that this is happening and it’s unfolding.”

Albanese, a career politician with working-class roots, is poised to inherit an economy with record-low unemployment that is also facing the fastest price gains since June 2001. He’s promised to increase wages for workers, improve the social-safety net and do more to fight climate change in a country that exports more fossil fuels than any country apart from Russia and Saudi Arabia.

At least four prominent members of the government lost their seats to the pro-climate action female independents. Treasurer Josh Frydenberg, widely viewed as a future leader of the Liberal-National Coalition, was trailing independent candidate Monique Ryan in his seat of Kooyong in Melbourne — a result that would raise questions about the future of Australia’s conservative politics.

In Western Australia, where Labor saw a huge surge in its vote, Indigenous Affairs Minister Ken Wyatt also lost his seat. Wyatt was the government’s most senior Indigenous Australian lawmaker.

Morrison’s coalition trailed Labor in opinion surveys throughout the campaign as it vied for a fourth term in office, with the nation’s 26 million people becoming frustrated over his management of the pandemic and his handling of climate-change related natural disasters.

Albanese is wasting no time getting started. On Saturday night he declared that he would be sworn in on Monday and would head to Tokyo as prime minister to participate in meetings of the Quad alongside President Joe Biden, Japan’s Fumio Kishida and Indian Prime Minister Narendra Modi. The grouping of democracies has picked up momentum in recent years as a key bloc countering China’s growing economic and military might in the region.

Although Morrison sought to present Albanese as soft on China, Labor adopted a very similar policy to the government toward Australia’s largest trading partner. Ties between the nations have soured in recent years as Morrison called for a probe into the origins of Covid-19 and sought to stem Chinese political interference, leading to trade reprisals from Beijing.

China’s security pact with the Solomon Islands, which sits some 2,000 kilometres away from Australia, disrupted Morrison’s efforts to make national defence a key part of his campaign strategy. Labor described the announcement as Canberra’s worst foreign policy failure since World War II, with Albanese vowing to fix relations with the country’s Pacific neighbours.

While polling showed support for Labor’s campaign over the “cost of living crisis” in Australia, few inside Albanese’s team publicly predicted victory as they were mindful of the coalition’s surprise come-from-behind win in 2019, which Morrison described as a “miracle”. Now the party can finally celebrate. 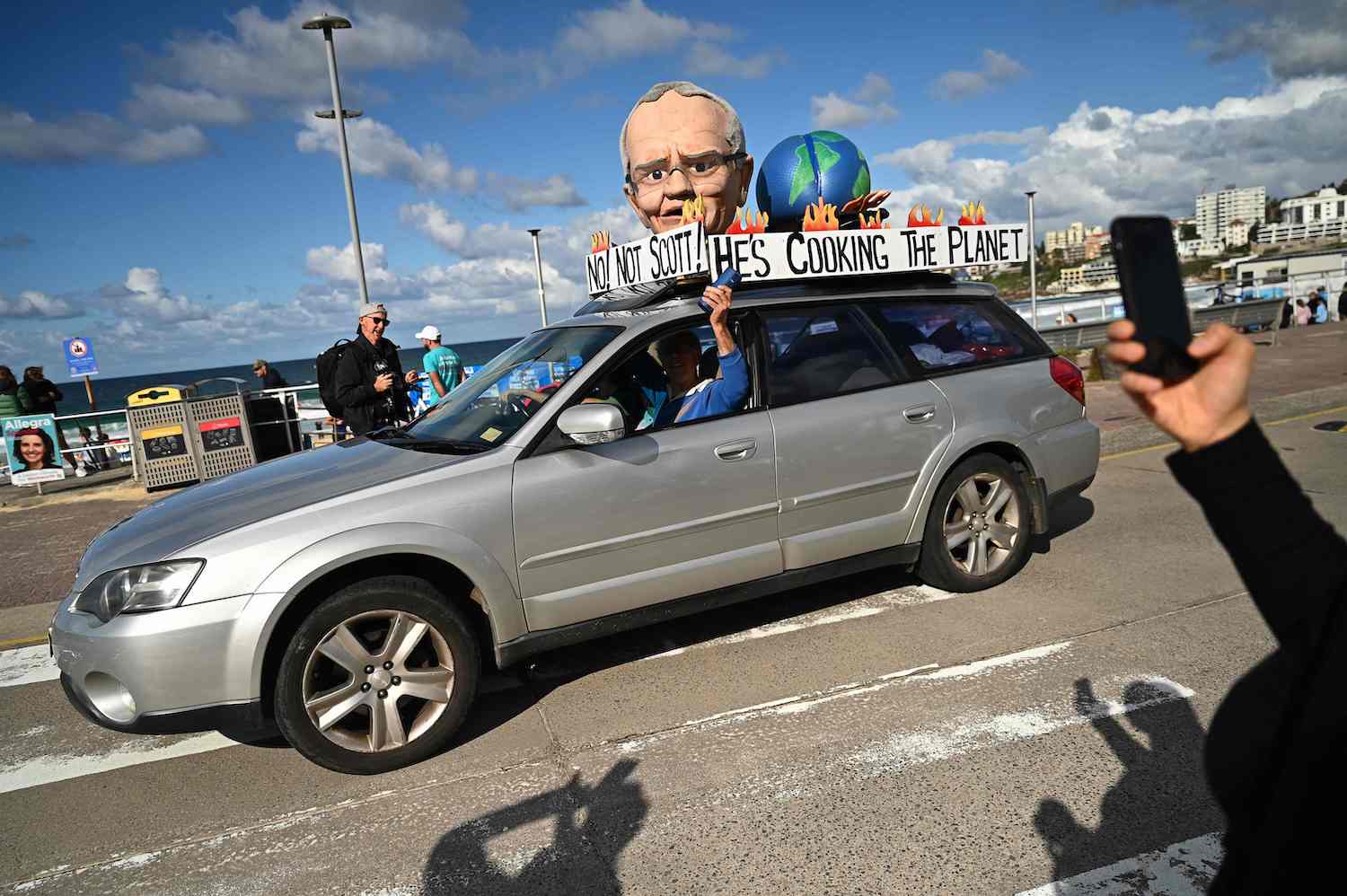 A vehicle bearing a display that makes a statement about Australian Prime Minister Scott Morrison’s climate policies is seen outside a polling station at Bondi Beach in Sydney on Saturday. (AFP Photo)