This picture from the Wildlife Conservation Society (WCS) Cambodia taken and released on Monday shows people watching as others release Cantor's giant softshell turtle hatchlings into the wild along the Mekong river in Sambour district of Kratie province.

Hundreds of critically endangered baby giant turtles were released into the Mekong River in Cambodia to mark World Turtle Day on Monday.

Cantor's giant softshell turtles have all but vanished across their former territory in Vietnam and Thailand thanks to poaching and illegal trade, and were only rediscovered in the Southeast Asian country in 2007.

The Wildlife Conservation Society coordinated the release of 580 hatchlings, which can grow to a length of up to 200cm and mainly live buried in the sand and the water, surfacing only twice a day to breathe.

Monks blessed the baby reptiles -- also known as "frog-faced turtles" for their distinctive appearance -- before helping conservationists and eager children send the stout-nosed snappers into the Mekong's muddy waters.

The creatures are among a batch of 982 turtles rescued as eggs -- to protect them from the dangers which threaten the species' numbers -- carefully incubated, hatched, and then released. 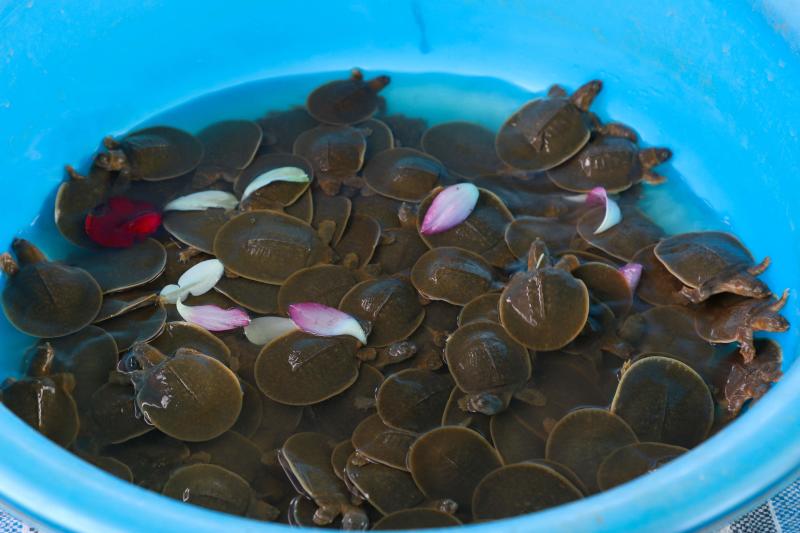 Ken Sereyrotha, country program director for WCS Cambodia, said significant progress had been made in protecting the animal in the country but more work was needed.

"This species is being threatened by illegal hunting and trafficking," he said.

The WCS and Cambodia's department of fisheries conservation of fisheries administration has found and rescued more than 2,000 eggs this year -- with the teams hopeful the remainder will eventually hatch.

Ouk Vibol, director of the fisheries department, urged local stakeholders to continue the conversation work, and promised that "those who still trade protected species will face legal action."

Last year, the teams managed to nurture and then release around 1,300 hatchlings into the wild.

Why are climate activists calling for reparations?

Interpol has issued a red notice for a South Korean cryptocurrency founder who is accused of fraud over the company's $40 billion collapse, prosecutors said Monday.