Moscow is pressing its offensive to capture key points of the Donbas region with more bombing of residential areas. (Photo: AFP)

KHARKIV, Ukraine: Ukraine's second city, Kharkiv, on Friday reeled from a deadly onslaught of Russian shelling as Moscow pressed its offensive to capture key points in the eastern Donbas region with more bombing of residential areas.

The pounding of Kharkiv, which according to local officials left at least nine people dead, raised fears that Russia had not lost interest in the city even after Ukraine took back control after fierce battles.

Over three months after Russia launched its invasion on February 24 -- and which has left thousands dead on both sides and displaced millions of Ukrainian civilians -- Moscow is focusing on the east of Ukraine after failing in its initial ambition to capture Kyiv.

Ukraine's President Volodymyr Zelensky reiterated accusations that Moscow is carrying out a "genocide" in Donbas, saying its bombardment could leave the entire region "uninhabited".

Oleg Sinegubov, the regional governor of Kharkiv which lies to the north of the Donbas region, said that nine civilians had been killed in the Russian shelling on Thursday.

A five-month-old child and her father were among the dead, while her mother was gravely wounded, he said on social media channels.

An AFP reporter in the city said the northern residential district of Pavlove Pole was hit and saw plumes of smoke rising from the area.

The journalist saw several people wounded near a shuttered shopping centre, while an elderly man with injuries to his arm and leg was carried away by medics.

Kharkiv mayor Igor Terekhov said the northeastern city's metro, which resumed work this week after being used mainly as a shelter since the Russian invasion, would continue operating, but also offer a safe space for residents.

In Donbas, Russian forces were closing in on several cities, including strategically located Severodonetsk and Lysychansk which stand on the crucial route to Ukraine's eastern administrative centre in Kramatorsk.

Pro-Russian separatists said they had captured the town of Lyman that lies between Severodonetsk and Kramatorsk and is on the road leading to the key cities that are still under Kyiv's control. (continues below) 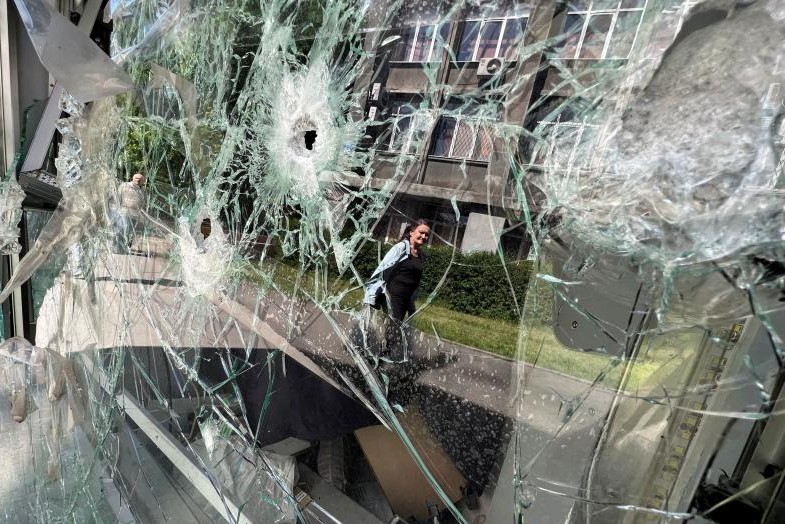 A building is reflected in a bullet-holed shop window of a residential area of Kharkiv, Ukraine. (Photo: Reuters)

Lugansk regional governor Sergiy Gaiday said in a video on Telegram that at least five civilians had been killed in the Lugansk region -- part of Donbas -- in the last 24 hours alone.

Four had been killed in Severodonetsk and another person in Komyshovakha 50 kilometres (30 miles) outside Severodonetsk, he said, accusing Russia of "ceaselessly shelling residential areas".

In Kramatorsk, children roamed the rubble left by Russian attacks as the sound of artillery fire boomed.

"I am not scared," said Yevgen, a sombre-looking 13-year-old who moved to Kramatorsk with his mother from the ruins of his village Galyna.

"I got used to the shelling," he declared as he sat alone on a slab of a destroyed apartment block.

Commentators believe that Russia's gains in over three months of war have been far more paltry than President Vladimir Putin hoped, although Moscow has gained control over a handful of cities in southern Ukraine such as Kherson and Mariupol.

The Kremlin is now seeking to tighten its grip over the parts of Ukraine it occupies, including fast-tracking citizenship for residents of areas under Russian control.

Occupying authorities in Mariupol -- which was taken over by invading forces this month after a devastating siege that left thousands dead and reduced the city to rubble -- cancelled school holidays to prepare students to switch to a Russian curriculum, according to Kyiv.

The intensified fighting across the country prompted Foreign Minister Dmytro Kuleba to air Kyiv's increasing frustration with the West, accusing allies of dragging their feet on arms deliveries and telling his German counterpart that Ukraine needs heavy weapons "as soon as possible."

Finnish Prime Minister Sanna Marin, whose country is bidding for NATO membership in response to its giant neighbour's invasion of Ukraine, said on a visit to Kyiv it would take Russia decades to repair its standing in the world.

"Trust is lost for generations," Marin told a press conference.

German Chancellor Olaf Scholz, who has faced criticism over Berlin's slow response, also weighed in Thursday, saying Putin will not negotiate seriously until he realises he might not win in Ukraine.

"Our goal is crystal-clear -- Putin must not win this war. And I am convinced that he will not win it," Scholz told the World Economic Forum in Davos.

The flow of grain exports from Ukraine, known as Europe's breadbasket, has been disrupted since Russia's invasion, threatening food security around the world and sending prices soaring.

The Kremlin on Thursday pointed the finger at Western countries for stopping grain-carrying vessels from leaving ports in Ukraine -- rejecting accusations that Russia was to blame.

President Putin said in a telephone call with Italy's Prime Minister Mario Draghi that Moscow was ready to make a "significant contribution" to averting a looming food crisis if the West lifts sanctions imposed on his country over Ukraine.

But the United States scoffed at the offer, with Pentagon spokesman John Kirby accusing Moscow of "weaponising economic assistance."