Supporters attend the annual Pink Dot event in a public show of support for the LGBT community at Hong Lim Park in Singapore on Saturday. (AFP Photo)

SINGAPORE: Thousands of Singaporeans dressed in pink gathered at a park Saturday calling for greater recognition of LGBTQ rights, the first such rally since 2019 after coronavirus restrictions were eased.

While the city-state is prosperous and developed, social attitudes remain conservative and sex between men is still illegal, although the statute is not actively enforced.

Singapore’s Pink Dot gay rights rally started in 2009 and has regularly attracted sizeable crowds despite a backlash from some quarters.

After holding online-only events during the pandemic, large numbers turned out Saturday as the rally returned to a downtown park — the only place in the city-state where protests are allowed without a police permit.

“I want to have my voice heard, I want to know that we matter and I want to have equality in Singapore,” Susan Helen, a 39-year-old business manager taking part, told AFP.

“We are human beings, so we just want to be treated equal in the face of the law. I want to be able to marry my partner.”

Others at the rally waved rainbow flags, danced and brandished placards with slogans such as “We’re not nuclear, we are queer”, and “Power to the queers”.

Organisers did not release figures on the crowd size, but an AFP reporter estimated that thousands attended.

Critics say that Singapore’s slow progress on gay rights is a contrast to advances made in other parts of Asia such as Taiwan and India.

They point to authorities maintaining the British colonial-era law that prohibits sex between men. Several attempts to overturn the legislation have failed in recent years.

The latest challenge was dismissed by Singapore’s top court in February, which ruled that the law would be maintained but on the basis that it “would not be proactively enforced”. (Story continues below) 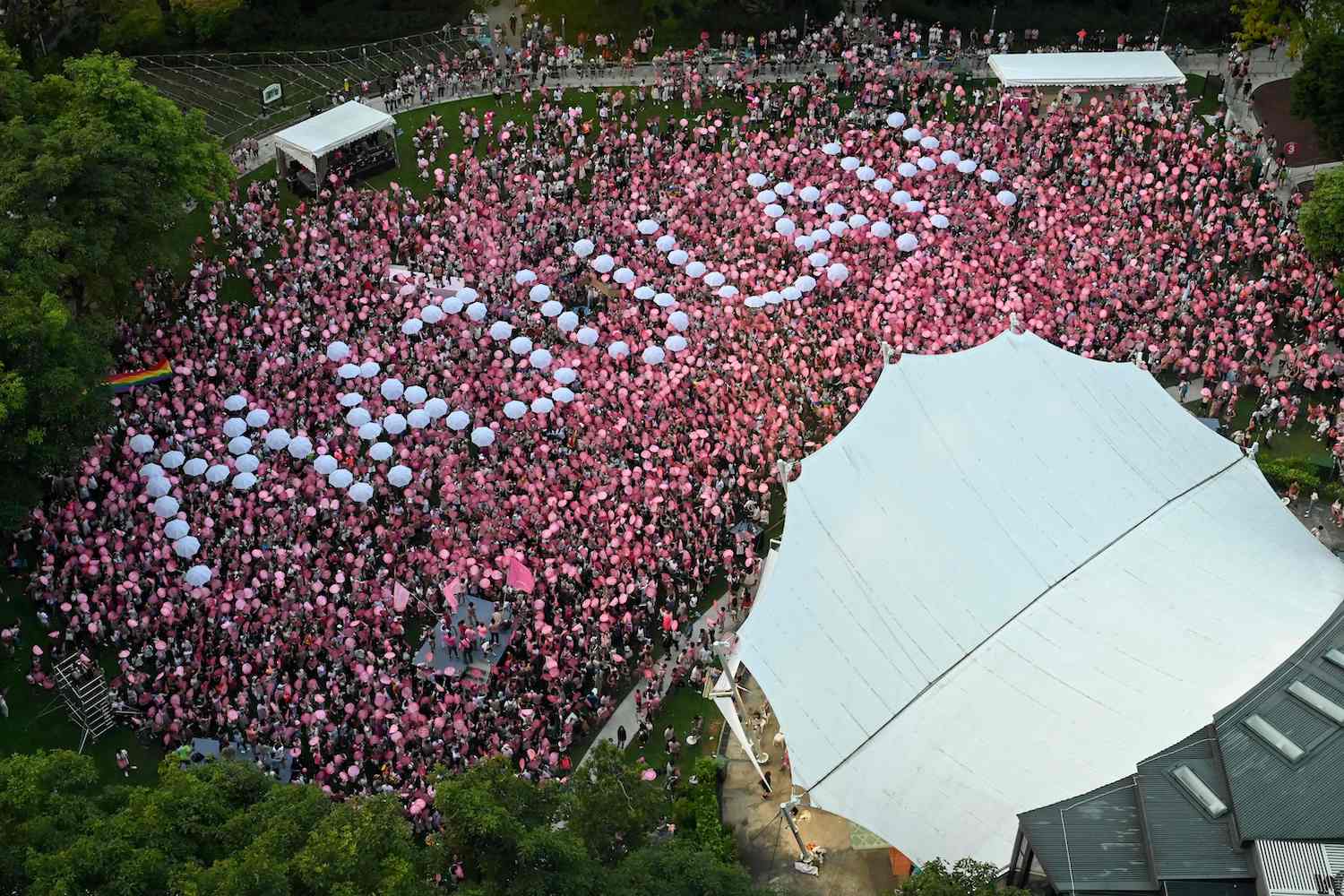 An aerial view shows the huge crowd, with some spelling out the word “majullah”, meaning “onward”, at Hong Lim Park in Singapore. (AFP Photo)

Open support for gay rights is growing, aided by changing social norms among the younger generation and a large influx of tourists and expatriates.

The percentage of people in Singapore who support the gay sex ban fell from 55 percent in 2018 to 44 percent this year, while citizens are becoming more supportive of same-sex relationships, a survey released this month by the market research firm Ipsos found.

Officials have maintained that most in socially conservative Singapore would be against repealing the law, which carries a maximum of two years in jail for homosexual acts.

But Law Minister K Shanmugam has acknowledged shifting attitudes, telling parliament earlier this year that the government is considering the best way forward.