A photo by Pierre Yves Pascal shows mangroves in the Guadeloupe archipelago of the Caribbean, where scientists have discovered a species of bacteria that grows to the size and shape of a human eyelash. The bacterial cells, named Thiomargarita magnifica are so large they are easily visible to the naked eye, challenging ideas about how large microbes can get. (Photo: Pierre Yves Pascal/ The New York Times)

NEW YORK: In a Caribbean mangrove forest, scientists have discovered a species of bacteria that grows to the size and shape of a human eyelash. These cells are the largest bacteria ever observed, thousands of times bigger than more familiar bacteria such as Escherichia coli.

“It would be like meeting another human the size of Mount Everest,” said Jean-Marie Volland, a microbiologist at the Joint Genome Institute in Berkeley, California.

Volland and his colleagues published their study of the bacteria, called Thiomargarita magnifica, on Thursday in the journal Science.

Scientists once thought bacteria were too simple to produce big cells. But Thiomargarita magnifica turns out to be remarkably complex. With most of the bacterial world yet to be explored, it is entirely possible that even bigger, even more complex bacteria are waiting to be discovered.

It has been about 350 years since Dutch lens grinder Antonie van Leeuwenhoek discovered bacteria by scraping his teeth. When he put the dental plaque under a primitive microscope, he was astonished to see single-celled organisms swimming about. For the next three centuries, scientists found many more kinds of bacteria, all of which were invisible to the naked eye. An E. coli cell, for example, measures about two microns, or under a ten-thousandth of an inch.

Each bacterial cell is its own organism, meaning it can grow and split into a pair of new bacteria. But bacterial cells often live together. Van Leeuwenhoek’s teeth were coated with a jellylike film containing billions of bacteria. In lakes and rivers, some bacterial cells stick together to form tiny filaments. We humans are multicellular organisms, our bodies made up of about 30 trillion cells.

While our cells are also invisible to the naked eye, they are typically much larger than those of bacteria. A human egg cell can reach about 120 microns in diameter, or five one-thousandths of an inch. Other species’ cells can grow even bigger: The green algae Caulerpa taxifolia produces blade-shaped cells that can grow to a foot long.

As the gulf between small and big cells emerged, scientists looked to evolution to make sense of it. Animals, plants and fungi all belong to the same evolutionary lineage, called eukaryotes. Eukaryotes share many adaptations that help them build big cells. Scientists reasoned that without these adaptations, bacterial cells had to stay small.

To start, a big cell needs physical support so it does not collapse or tear apart. Eukaryote cells contain stiff molecular wires that function like poles in a tent. Bacteria, though, do not have this cellular skeleton. A big cell also faces a chemical challenge: As its volume increases, it takes longer for molecules to drift around and meet the right partners to carry out precise chemical reactions.

Eukaryotes have evolved a solution for this problem by filling cells with tiny compartments where distinct forms of biochemistry can take place. They keep their DNA coiled up in a sac called the nucleus, along with molecules that can read genes to make proteins, or the proteins produce new copies of DNA when a cell reproduces.

Each cell generates fuel inside pouches called mitochondria. Bacteria do not have the compartments found in eukaryote cells. Without a nucleus, each bacterium typically carries a loop of DNA floating freely around its interior. They also do not have mitochondria. Instead, they typically generate fuel with molecules embedded in their membranes.

This arrangement works well for tiny cells. But as the volume of a cell increases, there is not enough room on the surface of the cell for enough fuel-generating molecules. The simplicity of bacteria seemed to explain why they were so small: They just didn’t have the complexity essential for getting big.

However, this conclusion was made too hastily, according to Shailesh Date, founder of the Laboratory for Research in Complex Systems in Menlo Park, California, and a co-author with Volland. Scientists made sweeping generalizations about bacteria after studying just a tiny portion of the bacterial world.

“We have just scratched the surface, but we’ve been very dogmatic,” he said. That dogma began cracking in the 1990s. Microbiologists found that some bacteria have independently evolved compartments of their own. They also discovered species that were visible to the naked eye. Epulopiscium fishelsoni, for example, came to light in 1993.

Living inside surgeonfish, the bacteria grows to 600 microns long — larger than a grain of salt. Olivier Gros, a biologist at the University of the Antilles, discovered Thiomargarita magnifica in 2009 while surveying the mangrove forests of Guadeloupe, a cluster of Caribbean islands that are part of France. The microbe looked like miniature pieces of white spaghetti, forming a coat on dead tree leaves floating in the water. (continues below) 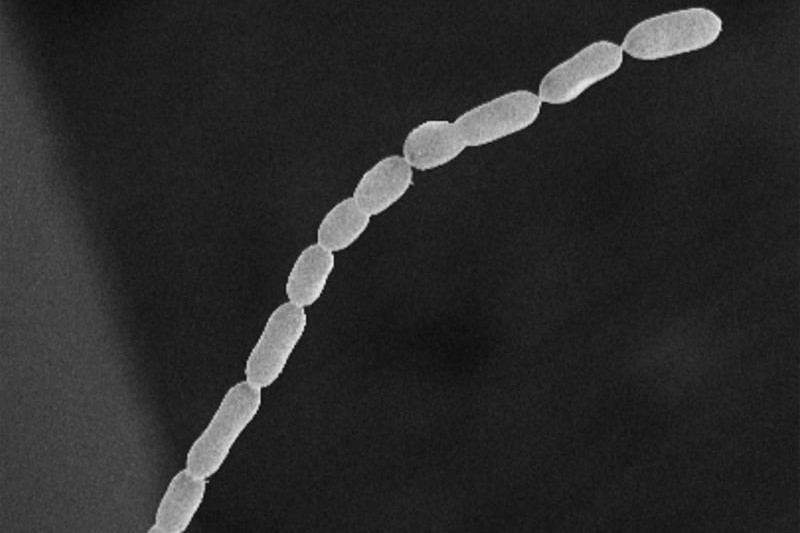 A 3D microscope image of Thiomargarita magnifica. Scientists say it is the world's largest known variety of bacteria, discovered in the mangroves of Guadeloupe. At up to two centimetres long, Thiomargarita magnifica is not only around 5,000 times bigger than most bacteria -- it boasts a more complex structure, according to a study published in the journal Science on June 23, 2022. (Photo: Olivier Gros/ Lawrence Berkeley National Laboratory / AFP)

At first, Gros did not know what he had found. He thought the spaghetti might be fungi, tiny sponges or some other eukaryote. But when he and his colleagues extracted DNA from samples in the lab, it revealed they were bacteria. Gros joined forces with Volland and other scientists to look more closely at the strange organisms. They wondered if the bacteria were microscopic cells stuck together into chains. That turned out not to be the case.

When the researchers peered inside the bacterial noodles with electron microscopes, they realized each one was its own gigantic cell. The average cell measured about 9,000 microns long, and the biggest was 20,000 microns — long enough to span the diameter of a penny.

Studies on Thiomargarita magnifica have moved slowly because Vallant and his colleagues have yet to figure out how to grow the bacteria in their lab. For now, Gros has to gather a fresh supply of the bacteria each time the team wants to run a new experiment. He can find them not just on leaves, but on oyster shells and plastic bottles sitting on the sulfur-rich sediments in the mangrove forest. But the bacteria seem to follow an unpredictable life cycle.

“In the last two months, I cannot find them,” Gros said. “I don’t know where they are.”

Some of the compartments seem to be fuel-generating factories, where the microbe can tap the energy in nitrates and other chemicals it consumes in the mangrove. Thiomargarita magnifica also has other compartments that look remarkably like human nuclei. Each of the compartments, which the scientists call pepins after the small seeds in fruits like kiwis, contains a loop of DNA.

While a typical bacterial cell has just one loop of DNA, Thiomargarita magnifica has hundreds of thousands of them, each tucked inside its own pepin. Even more remarkably, each pepin contains factories for building proteins from its DNA.

“They’ve got essentially little cells within the cells,” said Petra Levin, a microbiologist at Washington University in St. Louis, who was not involved in the study. Thiomargarita magnifica’s huge supply of DNA may let it create the extra proteins it needs to get big. Each pepin may make a special set of proteins needed in its own region of the bacterium.

Volland and his colleagues hope that after they start growing the bacteria, they will be able to confirm these hypotheses. They will also tackle other mysteries, such as how the bacterium manage to be so tough without a molecular skeleton. “You can take a single filament out of the water with tweezers and put it in another vessel,” Volland said. “How it holds together and how it acquires its shape — these are questions we haven’t answered.”

Date said that there may be more giant bacteria waiting to be found, perhaps even bigger than Thiomargarita magnifica. “How big they can get, we don’t really know,” he said. “But now, this bacterium has showed us the way.”