Who shot Shinzo Abe and why?
World

Who shot Shinzo Abe and why?

In a country where gun violence is rare, the murder of former Japanese prime minister Shinzo Abe is raising big questions about the shooter and his motive. Here’s what we know based on media reports and official statements.

Abe had just begun a campaign speech in the western city of Nara on Friday when he was shot from behind, from about three metres (10 feet). Two gunshots were heard. Moments later security personnel tackled a man to the floor. He was wearing a gray t-shirt, khaki trousers and a face mask.

The gunmen has been identified as Tetsuya Yamagami, a 41-year-old former member of the Japan Maritime Self-Defense Force — Japan’s navy — who was arrested on suspicion of attempted murder. NHK reported that he worked for the force from 2002 to 2005.

- What has the suspect said? -

The arrested man told police he was “frustrated” with Abe and had planned to kill him, broadcaster NHK reported, citing police. But he claimed not to have attacked the former premier over his political beliefs. The Mainichi newspaper said he was aiming at a religious leader who wasn’t attending the rally, adding to the confusion.

NHK reported that the gun had been homemade, and a close-up shot of the weapon on the floor appeared to show it taped together.

- What are the police doing now? -

Investigators are currently at the suspect’s home, preparing to enter his apartment, according to local broadcaster FNN. NHK reported that possible explosives were found at his house. 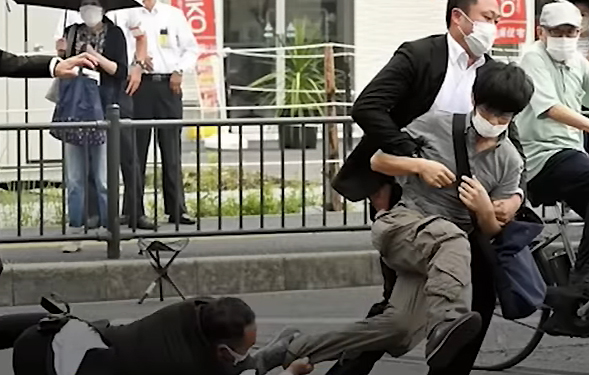