Sunday upper house elections will go ahead, as PM Kishida says country won't give in to violence

A hearse transporting the body of former Japanese prime minister Shinzo Abe arrives at his residence in Tokyo on Saturday. (AFP Photo)

TOKYO: A hearse carrying the body of assassinated former prime minister Shinzo Abe arrived in Tokyo on Saturday after he was shot at close range on the campaign trail.

The murder of Japan’s best-known politician rattled the country and sent shockwaves around the world, particularly given the nation’s low levels of violent crime and strict gun laws.

Senior members of Abe’s ruling Liberal Democratic Party lined up to pay their respects as the vehicle, believed to be carrying his wife Akie Abe, entered the couple’s residence in the capital.

The man accused of Friday’s shooting is in custody, with police saying he had confessed to killing the former premier, motivated by a belief Abe was linked to an unspecified organisation.

Police were investigating the unemployed 41-year-old’s background, including claims he had served in Japan’s navy, and said he appeared to have used a handmade gun.

Abe was delivering a speech in Nara ahead of Sunday’s upper house elections when he was shot, and campaigning resumed on Saturday with politicians saying they were determined to show democracy would prevail.

“We must never allow violence to suppress speech during elections, which are the foundation of democracy,” Prime Minister Fumio Kishida said on Twitter after courting voters in central Japan’s Yamanashi region.

“I believe I have a responsibility to complete this House of Councillors election in a free, fair and safe manner.”

Japanese media at Kishida’s first campaign event since the assassination described a tense mood and high levels of security, with a metal fence put up to separate the leader from the crowd.

Doctors said on Friday that Abe showed no vital signs when he arrived and died of enormous blood loss, despite massive transfusions.

They described multiple wounds to the politician’s neck, with the internal damage reaching as deep as his heart.

Abe’s murder shook Japan, with a visibly emotional Kishida describing the killing on Friday as a “barbaric act” that was “unforgivable”.

On Saturday afternoon, Kishida’s car was seen arriving at Abe’s residence as he went to offer condolences.

International reaction was similarly stark, with US President Joe Biden saying he was “stunned, outraged and deeply saddened”, and ordering flags on US government buildings to fly at half-mast.

Even regional powers with whom Abe had clashed expressed condolences. Chinese President Xi Jinping said he was “deeply saddened” by the killing, which South Korea’s president called an “unacceptable act”.

Investigators were still piecing together a picture of the man behind the assassination and his motives.

He has been identified as Tetsuya Yamagami, and police said Friday he admitted to targeting Abe over a grudge against an organisation he believed the former leader was linked to.

They have declined to name the organisation, though Japanese media outlets described it as a religious group.

The gun he used “is clearly handmade in appearance”, investigators said, and several other apparently handmade weapons were uncovered by police in protective gear who raided Yamagami’s home on Friday.

The suspect, who has been arrested on suspicion of murder, opened fire on Abe shortly before noon on Friday.

Footage from the public broadcaster NHK showed Yamagami, dressed in a grey shirt and brown trousers, approaching from behind before drawing a weapon from a bag.

At least two shots appeared to be fired, each producing a cloud of smoke. As spectators and reporters ducked, he was tackled to the ground by security. (Story continues below) 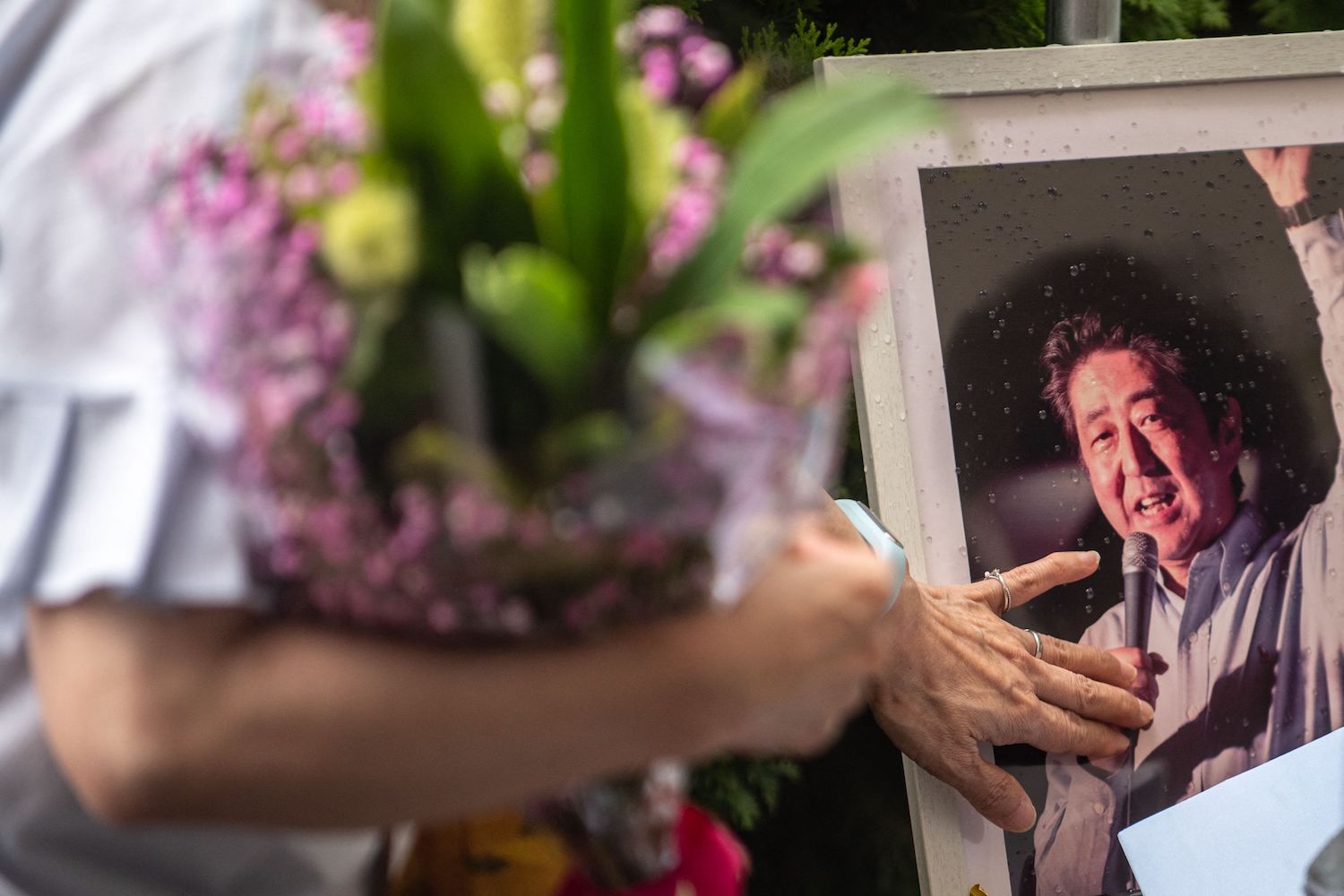 People line up on Saturday up to place flowers at a makeshift memorial outside the Yamato-Saidaiji Station in Nara, where Shinzo Abe was fatally shot the day before. (AFP Photo)

Japanese media reported that a wake would be held on Monday evening and a funeral on Tuesday for Abe’s close family and associates.

On Friday night and Saturday morning, a steady stream of mourners came to lay flowers and pray for Abe, who had been Japan’s longest-serving prime minister.

“I just couldn’t sit back and do nothing. I had to come,” said Nara resident Sachie Nagafuji, 54, visiting the scene with his son.

Abe was the scion of a political family and became the country’s youngest post-war prime minister when he took power for the first time in 2006, aged 52.

His turbulent first term ended in resignation for health reasons, but he returned to power in 2012 and stayed in office until the return of his ulcerative colitis forced a second resignation in 2020.

His hawkish, nationalist views were divisive, particularly his desire to reform the country’s pacifist constitution to recognise the country’s military, and he weathered a series of scandals, including allegations of cronyism.

But he was lauded by others for his economic strategy, dubbed “Abenomics” and his efforts to put Japan firmly on the world stage, including by cultivating close ties with US president Donald Trump.