China would "continue to carry out military training and prepare for war".

Beijing has raged at a trip to Taiwan last week by United States House Speaker Nancy Pelosi -- the highest-ranking elected American official to visit in decades -- staging days of air and sea drills around the island that raised tensions to their highest level in years.

Taiwan has accused China of using the Pelosi visit as an excuse to kickstart drills that would allow it to rehearse for an invasion.

The exercise in Taiwan's southernmost county Pingtung began at 8.30am local time and lasted about an hour, he said.

Artillery tucked in from the coast was lined up side by side, with armed soldiers in units firing the howitzers out to sea one after the other, a live stream showed. 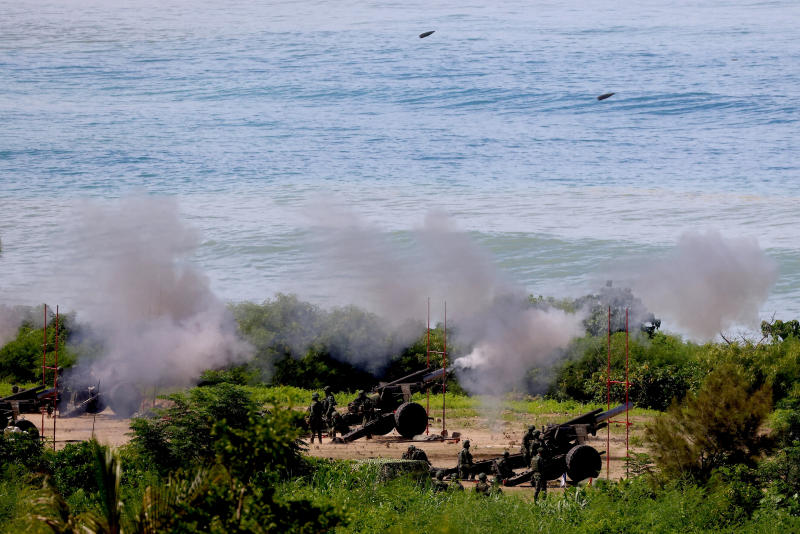 Taiwan held a similar drill on Tuesday in Pingtung. Both involved hundreds of troops, the military said.

The military has played down the exercises' significance, saying they were already scheduled and were not in response to China's war games.

"We have two goals for the drills, the first is to certify the proper condition of the artillery and their maintenance condition and the second is to confirm the results of last year," Lou said, referring to annual drills.

The latest exercise came after China's military indicated its own drills had come to an end Wednesday, saying its forces "successfully completed various tasks" in the Taiwan Strait while vowing to continue patrolling its waters.

But in the same announcement, China added that it would "continue to carry out military training and prepare for war".

In a separate white paper published Wednesday, China's Taiwan Affairs Office said Beijing would "not renounce the use of force" against its neighbour and reserved "the option of taking all necessary measures".

"We are ready to create vast space for peaceful reunification, but we will leave no room for separatist activities in any form," it said in the paper.

China last issued a white paper on Taiwan in 2000.

Taiwan's foreign ministry on Thursday joined its top policymaking body on China in rejecting the "one country, two systems" model that Beijing has proposed for the island.

"China is using US House Speaker Nancy Pelosi's visit as an excuse to destroy the status quo and taking the opportunity to make trouble, attempting to create a new normal to intimidate the Taiwanese people."

"One country, two systems" refers to the model under which Hong Kong and Macau were promised a degree of autonomy under Chinese rule.

Taiwan routinely stages military drills simulating defence against a Chinese invasion, and last month practised repelling attacks from the sea in a "joint interception operation" as part of its largest annual exercises.

In response to the Chinese military revealing it was bringing drills to an end Wednesday, Taiwan's army said it would "adjust how we deploy our forces... without letting our guard down".

Since the late 1990s, the island has transformed from an autocracy into a vibrant democracy, and a more distinct Taiwanese identity has solidified.

Relations between the two sides have significantly worsened since Tsai Ing-wen became Taiwan's president in 2016.

Tsai and her Democratic Progressive Party do not consider Taiwan a part of China.

Their platform falls under China's broad definition of Taiwanese separatism, which includes those who advocate for the island to have an identity separate from the mainland.