This photo taken on Sept 16, 2022, shows the tree used to beat children to death in the former Khmer Rouge prison camp at the Choeung Ek killing fields memorial in Phnom Penh. (Photo: AFP)

The tribunal was ruling on an appeal by Khieu Samphan, head of state for the murderous communist regime which wiped out a quarter of the Cambodian population in less than four years in the 1970s.

It is the last verdict that will be issued by the tribunal, which has cost more than US$330 million and prosecuted only five Khmer Rouge leaders, two of whom died during proceedings.

"The Supreme Court chamber finds no merit in Khieu Samphan's arguments regarding genocide and rejects them," Chief Judge Kong Srim said in the lengthy ruling.

The court also upheld the 2018 convictions against the 91-year-old for multiple crimes against humanity -- including murder, torture and enslavement -- on the basis of a "joint criminal enterprise", even if he did not personally take part in all crimes.

But it reversed convictions on several specific murder and persecution charges.

The hybrid court, with both Cambodian and international judges, was set up to try the senior leaders of the genocidal ultra-Maoist regime, which wiped out some two million people through starvation, torture, forced labour and mass executions during its 1975-79 rule. 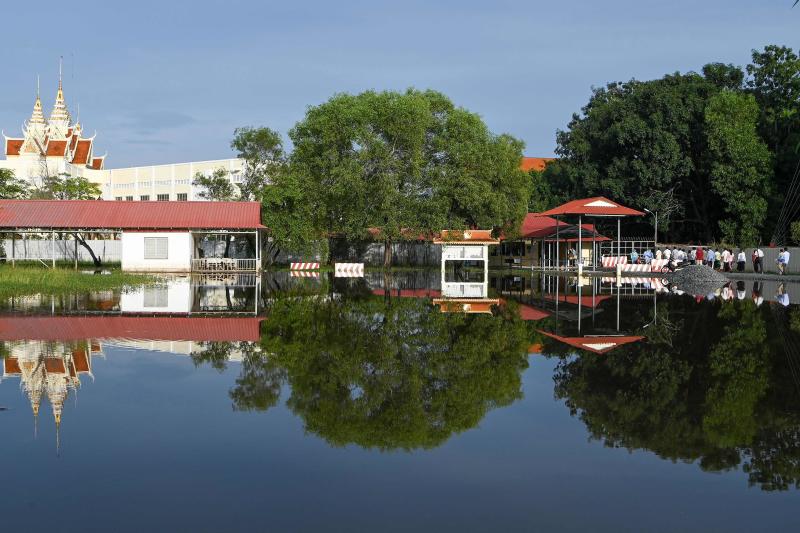 Attendees line up for the verdict of ex-Khmer Rouge head of state Khieu Samphan, who is appealing against life imprisonment for his role in the genocide committed by the regime, at the Extraordinary Chamber in the Courts of Cambodia (ECCC) in Phnom Penh on Thursday. (Photo: AFP)

Regime chief Pol Pot, known as "Brother Number One", never faced justice, dying in 1998 before the court was set up.

The genocide conviction relates to the persecution of ethnic-minority Vietnamese, seen by the Khmer Rouge as treacherous enemies within.

The chief judge said the charges related to "some of the most heinous events" during the Khmer Rouge's blood-soaked rule.

The frail Khieu Samphan sat hunched in a wheelchair in the dock, listening intently to the lengthy ruling through headphones. 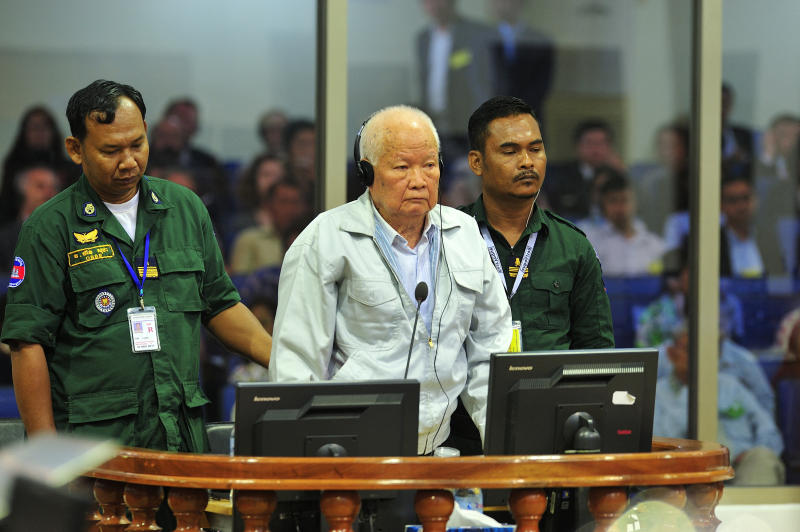 Former Khmer Rouge head of state Khieu Samphan is seen inside the courtroom of the Extraordinary Chambers in the Courts of Cambodia (ECCC) as he awaits a verdict, on the outskirts of Phnom Penh, Cambodia, in this Nov 16, 2018 photo. (Photo: Reuters)

Some 500 people packed into the courtroom to hear the verdict, including Khmer Rouge survivors, Buddhist monks, diplomats and government officials.

"I want justice for all victims because we suffered so much. The Pol Pot regime was so brutal," survivor You Soeun, 67, told AFP.

Alongside Khieu Samphan in the 2018 case, "Brother Number Two" Nuon Chea was also sentenced to life for genocide and other crimes, including forced marriages and rapes.

Both men were given life sentences by the court in 2014 for crimes against humanity in another case related to the violent forced evacuation of Phnom Penh in April 1975, when Khmer Rouge troops drove the population of the capital into rural labour camps.

The only other person convicted by the special court was Kaing Guek Eav, better known as Duch, head of the notorious S-21 torture interrogation centre where about 18,000 people were murdered.

While the tribunal, formally known as the Extraordinary Chambers in the Courts of Cambodia (ECCC), has secured few convictions, experts say it has done valuable work in promoting national reconciliation.

In earlier appeal hearings, Khieu Samphan's lawyers accused the tribunal of taking a "selective approach" to testimony and of using legal criteria that he could not have known when the alleged crimes took place more than 40 years ago. 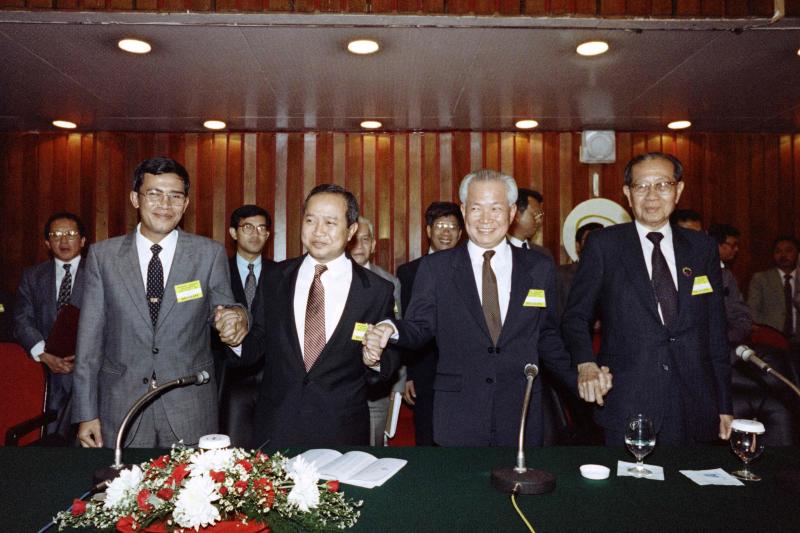 In this file photo taken on Sept 10, 1990 leaders of the Cambodian factions including Cambodian Khmer Rouge guerrilla faction leader Khieu Samphan, second from right, and Hun Sen, left, prime minister of the Hanoi-backed Cambodian government, joining hands at a press conference in Jakarta at the end of their talks where they reached a peace agreement to end the Cambodian war. (Photo: AFP)