Astronomers have hailed this early footage of the first time humanity deliberately smashed a spacecraft into an asteroid, saying it looks like it did a "lot of damage".

That would be good news, because the National Aeronautics and Space Administration's (NASA) Double Asteroid Redirection Test (DART) impactor struck the asteroid Dimorphos at 23,500 kilometres (14,500 miles) per hour on Monday night with the goal of deflecting its trajectory.

While Dimorphos is 11 million kilometres (6.8 million miles) away and poses no threat to Earth, it is being used as a historic test run so the world can be ready to defend itself if a future asteroid heads Earth's way.

After the impact, ground-based telescopes and the toaster-sized satellite LICIACube, which separated from DART a few weeks ago, revealed the first images of the collision.

"On the LICIACube images, the plume of what came off the surface was quite impressive," Antonella Barucci of the Paris Observatory's LESIA laboratory told AFP.

By examining the plume, "we can begin to estimate the density of the material on the surface," she said.

The Asteroid Terrestrial-impact Last Alert System (ATLAS) project on Tuesday tweeted a nine-second video of the impact taken by its telescope in South Africa.

"So, the whole sequence that you've seen on Twitter lasts about two hours in real time," he told AFP.

He said the "very, very big" plume was made by dust shooting off the asteroid.

"A lot of the dust is released at a speed that's greater than the gravity of the asteroid, and so it escapes," Denneau said.

The plume expanded to around "several thousand miles in diameter," he added.

In the coming days and weeks astronomers around the world will work to confirm whether the asteroid's trajectory was definitively altered by the impact.

Then the European Space Agency's Hera mission will arrive at Dimorphos in 2026 to survey the surface and discover the extent of DART's impact.

Hera mission principal investigator Patrick Michel said, "we are all impressed by the magnitude of the event".

"We have done a lot of damage to Dimorphos," Michel said.

"We have a quantity of ejected matter that is quite incredible." 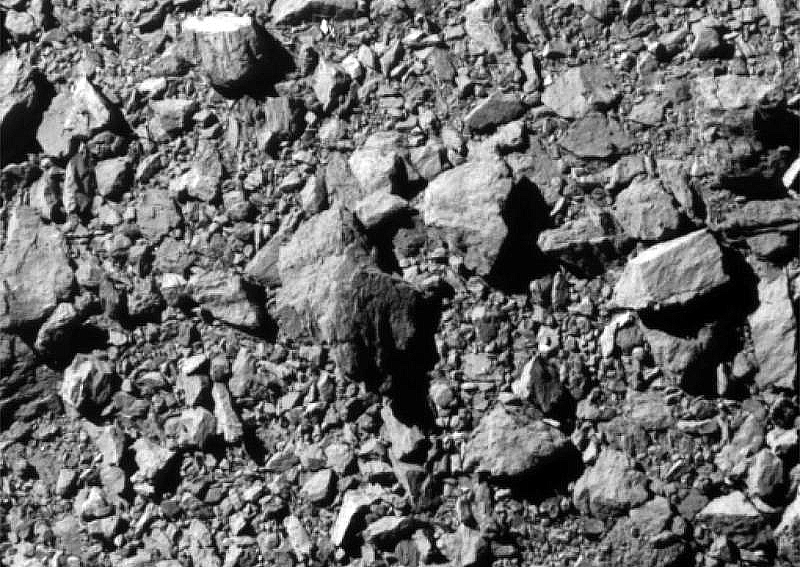 The last complete image of asteroid moonlet Dimorphos, taken by the DRACO imager on NASA's DART mission 12 kilometres from the asteroid and 2 seconds before impact, showing a patch of the asteroid that is 31 metres across, released on Tuesday.

The amount of matter ripped from the asteroid will help scientists work out exactly how much its trajectory has been affected -- if at all.

"The more material is ejected, the more it deviates," said Eric Lagadec, president of the French Astronomical Society.