Panic, bribes, ditched cars and a dash on foot: Portraits of flight from Russia
World

Volunteers distribute supplies at an Emigration for Action aid point for travellers arriving from Russia at the Verkhny Lars border crossing in Dariali, Georgia, on Friday. (Photo: Bloomberg)

Many grabbed their passports, abandoned their cars and crossed the frontier on foot, fearing that Russia would slam shut one of the last, precious routes to leave the country. The Kremlin dispatched teams to border crossings to weed out draft-eligible men and hand them conscription notices, and rumours spread on social media that it would seal the border.

Most of those who left had no idea when they would return home, if ever.

President Vladimir Putin last week ordered a draft of civilians to reinforce the army that has suffered tens of thousands of casualties in the war he launched against Ukraine. Since then, at least 200,000 Russians, mostly young men, have fled, squeezing through the few crossings still open.

More than one-quarter of them cut through the thin gorge separating Russia from Georgia at their only official border crossing — about 10,000 a day.

Photographer Ksenia Ivanova spent two days near that spot collecting the stories of fleeing Russians and taking their portraits. Many offered only their first names, fearing repercussions should they ever return home. They spoke of divided families, the futility of protesting in Russia and the fear of dying in a war they did not support.

“Every Russian family has someone who supports the war, and someone who’s against it.” — Vladimir, 31, a geologist from St Petersburg.

Vladimir thinks the Russian president is a madman who is not bluffing about using nuclear weapons — one reason he waited in line for 13 hours to cross the border.

“Every Russian family has someone who supports the war, and someone who’s against it,” he said. “It’s just some families fell apart because of it, and some have not.”

He went to one anti-war protest, but quickly realised both its danger and its futility, he said. 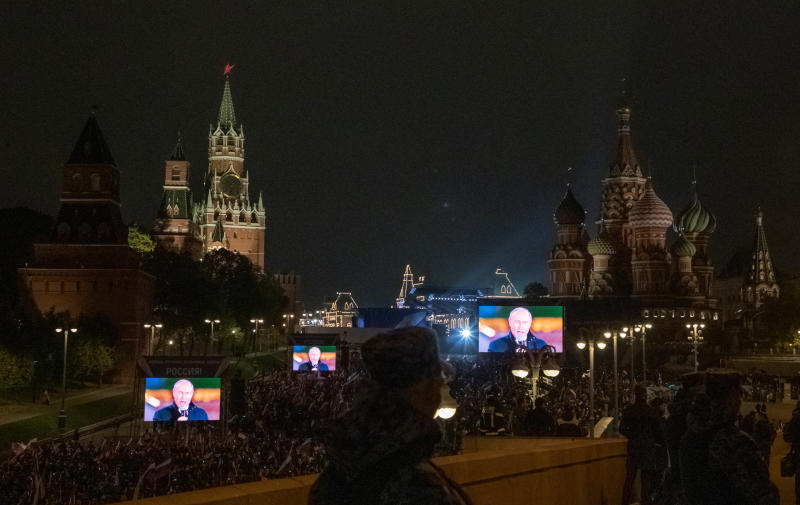 Russian President Vladimir Putin is seen on screens during the broadcast of a concert marking the declared annexation of the Russian-controlled territories of four Ukraine's Donetsk, Luhansk, Kherson and Zaporizhzhia regions, after holding what Russian authorities called referendums in the occupied areas of Ukraine that were condemned by Kyiv and governments worldwide, near St Basil's Cathedral and Red Square in central Moscow, Russia, on Friday. (Photo: Reuters)

“He began to threaten me that he would call the military enlistment office and they would come get me.” — Artyom, 28, who paid more than $1,600 in bribes, including to a police officer.

Artyom has grim memories of his year of required service in the army.

“Here you are, sitting in a trench, hugging a gun,” he said. “During a night like that you understand a lot, you realise a lot. After serving in the army, I decided for myself that I am a pacifist, and that war is bad. It’s terrible.”

After Putin’s call-up, a draft notice was issued for Artyom, a programmer, but he had other ideas. He, his wife and another couple drove south from Moscow.

Near the village of Urukh, about two hours from the border, they came to their first police checkpoint. There, an officer asked if Artyom wanted to be drafted.

“He began to threaten me that he would call the military enlistment office and they would come get me,” he said. Instead, he agreed to “negotiate.”

That was the first of many bribes Artyom paid throughout the drive, totalling 100,000 rubles — more than $1,600, far above the average Russian monthly salary of around 62,000 rubles. Some were to Ossetians, an ethnic group in the Caucasus, who helped navigate police stops.

“At one intersection, a policeman saw the Moscow license plates on our car and began to threaten that he would turn us back,” he said. “We offered to negotiate. He pretended that he was not interested in all this, but in fact, he just spins for money.”

When they finally arrived, the line of cars at the border stretched more than 5 miles, he said. So Artyom and the other man grabbed their jackets, left their wives in the car and ran for the border. The line there was tense.

“Everyone was emotional,” he said. “People were arguing, screaming.”

Still, they got through. Three days later, they were still waiting for their wives to arrive with the car.

“I do not support the war, and I do not want to go kill Ukrainians.” — Anton, 26, who crossed the border into Georgia on his motorbike.

Anton was still bewildered at how quickly his life had changed.

“I do not support any military action against Ukraine,” he said. “I do not think that Ukraine provoked or anything like that. These are all just pure propaganda statements.”

Anton, an information technology specialist from Krasnodar, often called the capital of Southern Russia, added, “In this matter, I am completely on Ukrainian side, to be honest.”

Like most Russians crossing the border, Ilya does not support the invasion of Ukraine.

But what pushed him to flee his country was not fear of being drafted, he said — it was the thought of being trapped there.

“I am scared of being limited in travel if they shut down the border,” he said. “I don’t want to be tied up to one country. I want to be able to travel.”

“We seemed to be a free country some time ago.” — Sergei, who biked across the border to Georgia with his brother Semyon and their cousin, Mikhail.

Two brothers and their cousin abandoned their car in the traffic jam at the border and pulled out their bicycles. They pedalled across at night and stopped to pitch a tent on the Georgian side.

They were university students and worked as sailing instructors in Gelendzhik, a Russian resort town on the Black Sea.

“Today you are a normal, free person, and tomorrow you go to the army,” said Sergei, 26, adding, “and if you don’t want to do that, then you go to jail. You have no choice. We seemed to be a free country some time ago.”

His brother Semyon, 24, had already received a call to come to the military registration and enlistment office.

“We have an acquaintance in Moscow, he said he was walking on the streets of Moscow when he got stopped by the National Guard,” said Mikhail, 21, their cousin. “They asked him ‘Do you have a draft letter?’ No. ‘Well, now you have it,’ the guard said.”

He would return “to a Russia with more freedom, without the fear of death, jail, punishment.” — Grigory, 35, who crossed the border on foot.

For his first winter in exile, Grigory plans to go to India. He doesn’t imagine returning to Russia any time soon.

“Only to a Russia with more freedom, without the fear of death, jail, punishment,” said Grigory, an IT worker from Kislovodsk, a southern city. “And where there is no total fear about every step you take.”

“It felt emotionally painful to cross the border.” — Timofei, 35, who has taken shelter in the woods.

On the train south from Moscow, Timofei was surrounded by “young, bright” men. His heart was filled with sorrow, he said — for the ones leaving, and the others who could not leave, and could soon be face-to-face with war. “It felt emotionally painful to cross the border,” he said.

“There is no meaning in this war, no reason to it either,” said Timofei, who trained as a physicist and works as a labourer. “This war just benefits a certain group of people. They want to create social conflicts; they want to make people hate each other.”

“I will learn something new and find a job in a different field.” — Kirill, 31, who has been waiting for his wife for three days since they were separated at the Russian border.

After paying 100,000 rubles in bribes at police checkpoints and paying locals to help him navigate his car through a forest, Kirill reached the thronged border crossing. Traffic was not moving. When he heard that a Russian armoured vehicle had arrived, he left his wife in their car, and set out by foot.

“I literally passed that armoured personnel carrier while walking,” said Kirill, who worked in finance in Rostov-on-Don.

At the border, a Russian guard tried to shame him for “running away, asking who would protect our mothers,” he said. “But I did not react to that, and we moved on.”

He had saved up enough money to last six months, he figured. He was not sure what he would do. He never liked his job in finance.

“I’m a believer that people should be continuously learning. So, I will learn something new and find a job in a different field,” he said. “Honestly, I always wanted to be a carpenter and to be a tattoo artist. I love working with wood and it’s my dream.”

As for the war, he said he hopes it ends soon, and wants Ukrainians to know that many Russians oppose it.

“I know that some Ukrainians will hurt for a long time. But I hope that they will come to a realisation that there are bad and good people in every nation.” 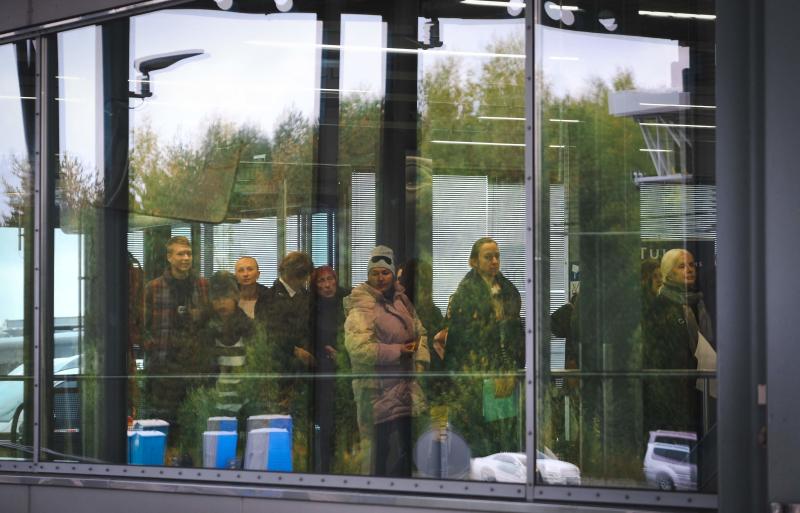 People queue at the passport check at the border checkpoint crossing in Vaalimaa, Finland, on the border with the Russian Federation on Thursday. (Photo: AFP)