She's a doctor. He was a limo driver. They pitched a $30m arms deal
World

She's a doctor. He was a limo driver. They pitched a $30m arms deal

NEW YORK: After falling out with his partner at a limousine company in the St. Louis suburbs, Martin Zlatev recently sought a lucrative new business opportunity: selling $30 million worth of rockets, grenade launchers and ammunition to the Ukrainian military.

Contract documents and other records obtained by The New York Times show that the deal relied on layers of middlemen and transit across seven countries. And it exists in a legal grey area, designed to skirt the arms-export rules of other countries.

“Time is of the essence,” the pair recently wrote to Ukraine’s Ministry of Defense. They outlined a plan to sell American, Bulgarian and Bosnian arms to Ukraine.

Since the Russian invasion in February, the Biden administration has quietly fast-tracked hundreds of millions of dollars’ worth of private arms sales to Ukraine, slashing a weekslong approval process to a matter of hours. In just the first four months of the year,  the latest data available, the State Department authorized more than US$300 million in private deals to Ukraine, government documents show. The department authorized less than $15 million worth of such sales to Ukraine during all of the 2021 fiscal year.

That has helped open another stream of weapons to the Ukrainian battlefront, but it has also enticed new players like Zlatev and his partner, Heather Gjorgjievski, into a shadowy market. Weapons sold through private brokers are far more likely to end up on the black market and resurface in the hands of America's  adversaries, according to government advisers and academics who study the trade.

Recent experience in Afghanistan and Syria shows that, without strict tracing policies, weapons can end up with terrorist groups or hostile military forces. These private arms sales are a pittance compared to the more than $17.5 billion worth of machine guns, anti-tank missiles and other security aid the White House has sent to Ukraine.

But those deals have stringent tracking requirements to help ensure the weapons go to their intended recipients. Private sales come with less oversight. The sellers, the buyers and the weapons are all kept out of the public eye.

“It’s the Wild West,” said Olga Torres, a lawyer who represents arms exporters and serves on the federal Defense Trade Advisory Group. “We are seeing a lot of people who were previously not involved in arms sales getting involved now because they see the opportunity.”

In recent months, Torres said, she has consulted with a Texas nonprofit that tried to send weapons to Ukraine without realizing it needed US  permission, and a broker who wanted to sell Indian weapons to Ukraine but illegally claim they were American. (She said she did not ultimately represent the broker.)

Just as it has cut the approval time for deals to under a day, the State Department has also accelerated the registration process for new arms dealers. “Generally, this is a process that takes 60 days,” Zlatev wrote in a letter to the Ukrainian defense ministry. “We were approved in seven days.”

At home on a suburban cul-de-sac on a recent Tuesday, Zlatev, 45, came to the door and denied any knowledge of an arms deal. “I don’t know what you’re talking about,” he said when shown copies of contracts for rockets, grenade launchers and bullets drafted by his company and the Ukraine Ministry of Defence. Leaving her medical office later that day, Gjorgjievski, 46, acknowledged knowing about the deal but would not discuss it.

Richard El-Rassy, a lawyer for Zlatev’s company, later sent an email explaining that the company aimed “to facilitate potential defense trade transactions with allied foreign nations.” He said the State Department had approved the company’s request to move ahead with a deal. (continues below) 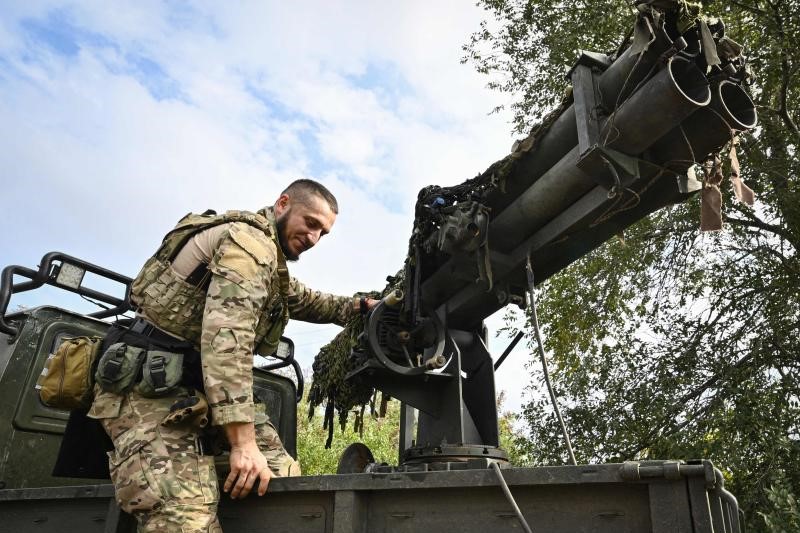 A Ukrainian soldier with the call-sign Ryba, which means "fish", with a homemade four-tube multiple rocket launcher, in Kryvyi Rih on Sept 28, amid the Russian invasion of Ukraine. (Photo:  AFP)

With a typical arms broker commission, the pair would stand to make more than $2 million. Records show the deal was in its final stages, with both sides having reviewed and revised the contract. But after the Times asked both El-Rassy and the Ukrainian government why the deal relied on falsified documents to evade foreign export laws, the lawyer sent a new statement saying the deal was off.

Both Bosnia and Bulgaria, two key weapons sources in the deal, have publicly said they do not allow arms exports to Ukraine. The Biden administration encourages private sector deals for several reasons. It saves the Pentagon from further depleting its own armory after months of sending arms to Ukraine. And private sellers can provide weapons that the government cannot, like the Soviet-style weapons already used by Ukrainian soldiers. Not all private sales carry the same risk.

Foreign governments, for example, frequently buy weapons from major American defence contractors. Deals like the one Zlatev proposed are different. Rather than selling directly, they involve brokering arms sales from other countries, with numerous middlemen in between. Records show that Zlatev and Gjorgjievski planned to supply Ukraine with bullets produced in the United States and weaponry from Bulgaria and Bosnia.

Each of the deal’s many intermediaries is a potential point for weapons to be diverted, experts say. That’s especially true when dealing with countries like Ukraine and Bulgaria with well-documented corruption and free-flowing black-market arms.

“All the risks — diversion, escalation, corruption — are all magnified by the fact that we don’t have visibility into these private-sector deals,” said Elias Yousif, a researcher with the Stimson Center, a Washington research group that studies the arms trade. “You encourage this entire economy that exists in this gray space across borders and with people of questionable motives.”

While lawyers say they have seen an influx of new brokers, a State Department spokesperson said that the department had not compiled data for 2022 to say for sure. Regardless, the spokesperson said that brokered arms deals like the ones Zlatev proposed represent a small fraction of the US-authorized arms trade. The State Department has a tracking program that examines a portion of the deals, looking for risks of arms being diverted, among other concerns.

Of the 19,125 export requests that the department authorized in fiscal year 2021, the tracking program checked 281. Zlatev, who is originally from Bulgaria, got into the arms business last December during a perilous moment both at home and abroad. Russian troops were massing near the Ukrainian border.

The pandemic destroyed business travel to St Louis, crushing the limo industry, and Zlatev had a falling out with his business partner. He based his business, BMI US LLC, in Eureka, a small city on the far outskirts of St Louis, Missouri. The company shares an address with a firearms training facility, next to a Mexican restaurant.

A trainer there said Zlatev rents space because federal regulations require some arms dealers to have a physical address. Later corporate filings show Gjorgjievski as a partner. They got BMI letterhead with cross hairs over the “I.”

The timing was perfect. Ukrainian authorities were soon scouring the world for weapons, looking to quickly spend whatever was necessary to bolster the front lines. For instance, a state-owned Ukrainian company began contacting US arms brokers, looking to buy tanks, mortars and Soviet-style MiG-29 fighter jets, according to letters obtained by the Times.

The US side of the BMI deal was relatively straightforward, documents show. Once the Ukrainian government deposited about $25 million in the company’s Bank of America account, BMI would pay a middleman for 2.2 million rounds of surplus US military ammunition and fly it to Poland. From there, drivers would truck the bullets to Ukraine. Separately, BMI would buy 540 anti-tank rocket-propelled grenade launchers and 22 mortars from a Bosnian producer.

These weapons would travel by truck convoy through Croatia, Slovenia, Austria, Slovakia and Poland to the Ukrainian border, according to the deal documents. Zlatev also planned to ship 900 air-to-ground rockets from Bulgaria, through Poland, to Ukraine.

The Bosnian and Bulgarian deals, worth about $5 million, were complicated by the weapons export bans in both countries. Records show that BMI planned to get around that by providing documents to the Bosnian and Bulgarian governments falsely claiming that the arms would end up in Poland, rather than Ukraine, according to a plan Zlatev sent to Oleksandr Liiev, a former Crimean tourism official who now procures weapons for the Ukrainian Ministry of Defence.

The legality of using falsified records is murky, say lawyers and academics who work in the field. BMI’s documents say it was honest with the State Department about the weapons’ real destination. But the use of subterfuge abroad would make an already murky trade even more opaque, and risk upsetting allied foreign governments.

“Anytime there’s fake end-user certificates, that should be a red flag to the State Department,” said Jodi Vittori, a Georgetown University professor who studies the arms trade.

A State Department spokesperson declined to comment on whether such practices would violate US laws. A spokesperson for the Ukrainian defense ministry would not discuss the BMI deal. Whether the deal goes forward or not, the BMI documents show that the Russia-Ukraine war presents an opportunity to charge big prices.

The bullets that Zlatev planned to sell were 50% more expensive than those publicly listed by other vendors. His grenade launchers were selling for more than twice what is listed on a price list for United Nations peacekeeping forces. Experts say these increases typically help pay the middlemen — at the expense of a nation in the middle of a war.

The bullets, rockets, mortars and grenade launchers that Zlatev planned to ship were unlikely to meaningfully tilt the war in Ukraine’s favor, said Yousif, the researcher. But the process of establishing middlemen, trade routes and agents with falsified documents could have a lasting impact.

Once the war is over, he said, Ukraine could turn into a hub for black-market weapons dealing: “The illicit market will emanate from this country for the next 30 years, as it did just after the Cold War.”