'I’m speechless. How could he do this to children?' asks grandfather of victim

Sittipong Taothawong comforts his wife Kanjana Buakumchan as she holds their child’s milk bottle and blanket while standing outside the childcare centre in Uthai Sawan where 22 children were slain on Thursday. (AFP Photo)

NONG BUA LAM PHU: One by one, grieving parents came to lay single white roses on the steps of the childcare centre where nearly two dozen of their children were murdered.

Some bowed their heads in prayer, some hugged each other in consolation as they laid the blooms on the steps of the low, yellow-walled building, tributes to 22 young lives cut short.

Outside, in a local government compound on the edge of a village deep in the green farmlands of Na Klang district of the northeastern province, scores of traumatised relatives gathered.

Attacker Panya Khamrab, a sacked policeman, killed at least 36 people on his gun-and-knife rampage, including his own wife and child, before ending his own life on Thursday. It was the worst mass killing by a single perpetrator in the country’s history.

Ten more people were injured and seven remained in hospitals on Friday. Overnight, coffins carrying the bodies of the victims arrived at a morgue in neighbouring Udon Thani.

His Majesty the King and Prime Minister Prayut Chan-o-cha were expected to visit survivors of the attack later in the day.

“Before he passed away he wished to eat pizza. We were very sad that we didn’t buy pizza for him before,” Naliwan told AFP as she stood outside the centre on Friday.

“He was very sweet, very kind, he always shared things with children, with everyone,” she said.

“Last night for him, he was very difficult and he asked if he could sleep with his parents, and his little sister.

“We don’t accept that this is going to be his last night with his parents and his little sister.”

The family first heard about the shooting from neighbours.

Panita and her husband rushed to the scene by motorbike to search for Kamram, only to learn the worst.

Cradling her 11-month-old daughter Kanta, Panita fought back tears as she said: “It is incomprehensible.”

At the hospital in Nong Bua Lam Phu, relatives of the injured waited in turns at the intensive-care unit to visit their loved ones, bringing food, diapers and other supplies.

As the day wore on and the heat rose, more and more people arrived at the childcare centre — the whole of a small rural community of Uthai Sawan united in grief.

Buarai Tanontong, 51, who lost two three-year-old grandsons, was among those left stunned by the events.

“I was very shocked and frightened. I couldn’t sleep, I didn’t think that it would be my two grandsons,” she said as she clutched her distraught daughter’s shoulder outside the nursery.

Local Kamjad Pra-intr said the gunman was a familiar figure in the area.

“Everyone knows who the shooter is. He used to be a police officer. He was a nice guy but later on we all know he was into meth,” she said.

“It’s a small community so we know each other and we are like a family, I know three or four kids who died there.”

Kam Pornnikom described the horror of learning that his three-year-old grandson was among the dead.

“My heart almost stopped. His parents had split up so I was like his father-figure and the grandmother was like his mother,” he said.

“I’m speechless. How could he do this to children?” (Story continues below) 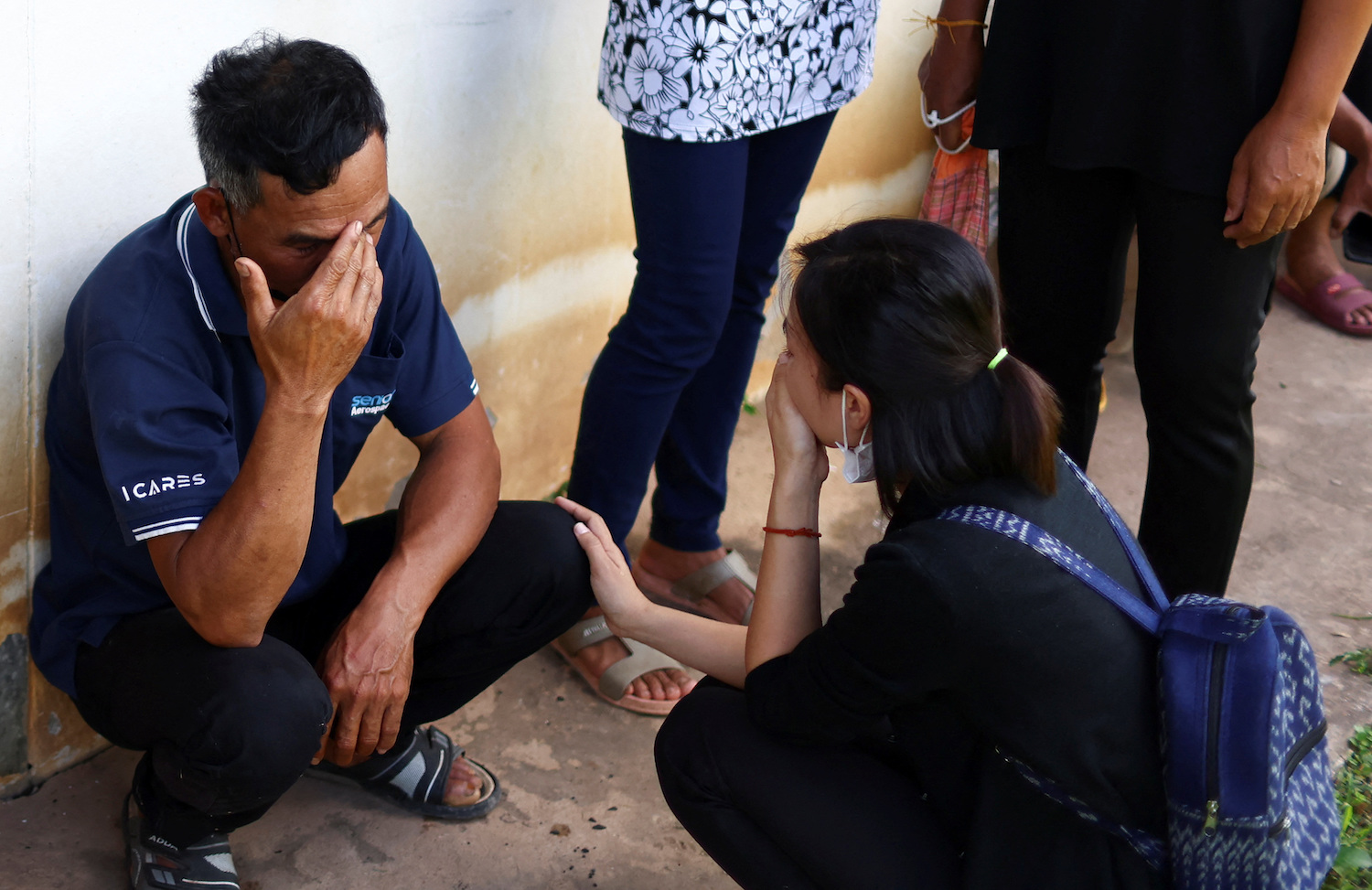 Social media was also awash with grief and anger on Friday over the slayings of so many “tiny angels”.

“It’s so heart-breaking. They were small kids, they did not deserve this. Some of them were still in their afternoon naps,” said 29-year-old Bangkok resident Chamita Itthiponwitoon.

More than 4.7 million people sent posts with the Thai hashtag #กราดยิงหนองบัวลําภู (#MassShootingNongBuaLamphu) by Friday afternoon, many with messages such as “RIP Children of Heaven” and “I hope you are reborn as angels in heaven”.

On the Facebook page of the Uthai Sawan Child Development Centre, hundreds of people posted condolence messages under the centre’s last post before the massacre, an account of a visit the children made to a temple in September.

Amid the grief, questions are being raised about guns, drugs, mental health and the accountability of the security forces.

Thursday’s attack comes two years after a mass shooting by an ex-soldier at a shopping mall and army base in Nakhon Ratchasima in which 29 people were killed.

“The mass shootings in Korat and Nong Bua Lam Phu reflect some problems in the army and police, including mental health and problems with command,” Wiroj Lakkhanaadisorn, the Move Forward Party’s former Bangkok governor candidate, said in a post on Twitter shared 125,000 times.

“If the problems are not solved, it would mean that the lives of people are at risk from the people who have these weapons in their hands.”