Southeast Asian countries look set to maintain ties with Russia as a trio of global summits loom, despite United States-led efforts to isolate Moscow over its Ukraine invasion.

The Ukraine conflict and its repercussions -- higher fuel, energy and food costs and supply chain disruptions -- will loom over the back-to-back gatherings in Phnom Penh, Bali and Bangkok. Thailand's capital will host the Apec summit from Nov 18-19.

The diplomatic whirl begins this week with a gathering of leaders from the Association of Southeast Asian Nations (Asean), which has been largely muted on the invasion of Ukraine -- with the exception of Singapore, which imposed sanctions.

Ukraine's President Volodymyr Zelensky has asked to send a video message to Asean and has been invited to attend the G20 summit in Bali, which follows it, in person.

G20 host Indonesia has sought to carve out a peacemaker role, inviting Russian President Vladimir Putin as well as Zelensky, though neither has confirmed his presence.

At Asean, Ukraine will sign a "treaty of amity and cooperation", the first step towards establishing formal relations.

Despite these gestures, analysts expect Asean nations to continue their longstanding policy of strategic fence-sitting.

"I think what the bloc will do is continue cooperation with Russia in a very business-as-usual fashion," Joanne Lin from Singapore's Yusof Ishak Institute told AFP.

"Many member states are very good at compartmentalising issues."

Putin signalled a pivot to Asia in September in the face of a barrage of Western sanctions, hailing the "colossal new opportunities" the region offered.

Analysts say Russia hopes to curry favour with Asean countries struggling with soaring energy bills by offering oil and gas, while also cementing ties with longstanding allies such as Myanmar and Vietnam.

As Europe tries to wean itself off Russian hydrocarbons, Moscow is scrambling to find new markets and offering huge discounts.

Indonesia's state oil and gas company Pertamina is in talks to buy crude oil, while Myanmar and Laos are also hoping Moscow can ease fuel shortages.

Over the past year, the Kremlin has stepped up contacts with longstanding allies in the region, particularly Vietnam and military-ruled Myanmar, a major buyer of Russian weaponry for its fight against pro-democracy militias. 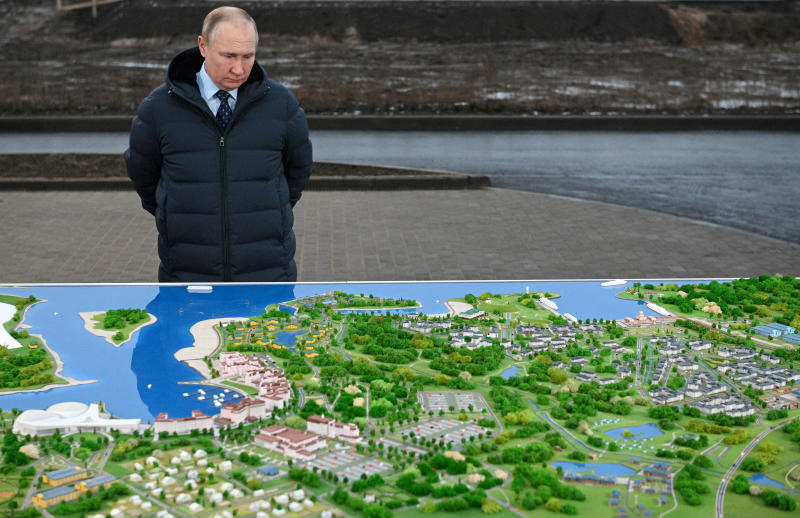 Russian President Vladimir Putin listens to explanations as he visits a transport hub under construction at a resort in the Tver region, Russia, on Monday. (Photo: Reuters)

Overtures have also been made to Thailand, with the kingdom's foreign minister visiting Moscow last month for trade-focused talks.

Thailand's crucial tourism industry, struggling to bounce back after the pandemic, is looking to Russia as sanctions make travel to Europe harder for Russians.

Last month, Russia's Aeroflot resumed direct flights to the Thai holiday island of Phuket, more than six months after they were suspended following the invasion of Ukraine.

Thailand, along with Vietnam and Laos -- another longstanding Moscow ally -- joined the likes of China and India in abstaining at a UN General Assembly vote last month to condemn Russia's annexation of parts of Ukraine.

Against Moscow's inducements, Southeast Asian countries will weigh the risks of breaching US sanctions or stirring Washington's wrath.

Earlier this year, Malaysia was forced to issue hurried denials after its ambassador in Moscow appeared to suggest it was willing to sell semiconductors to Russia.

And the threat of US sanctions sank two major Kremlin arms deals in the region.

In July, the Philippines scrapped a US$216 million deal to buy 16 Russian Mi-17 helicopters.

Last year, Indonesia said it had backed out of an agreement for 11 Russian Su-35 jets.

As Western sanctions and boycotts bite, Moscow needs to shore up supplies of raw materials, vehicle spare parts, semiconductors as well as consumer goods such as electronics and clothing.

Russia -- the biggest supplier of arms to Southeast Asia in the last 20 years -- is also desperate to buttress its under-pressure military export industry.

And while China has been warmer, calling for deeper ties and avoiding criticism of the invasion of Ukraine, Moscow is seen as wary of becoming too dependent on Beijing.

Ivanov of the Asia Society said the pivot to Asia "is no longer a policy option, but a necessity" for Russia and diversification of ties would help it avoid "becoming a Chinese vassal state".

"Russia has a lot of work to do in Southeast Asia to lift its economic and diplomatic engagement, and we can expect to see more of Russia in the region," he told AFP.

Half a million strike in biggest UK walkout in 12 years

Kosovo PM not giving in against Serbia