Chinese President Jiang Zemin tries on a new cowboy hat given to him by Calgary Mayor Al Duerr in Calgary, Canada, on Nov 26, 1997. (Photo: Reuters)

China's former leader Jiang Zemin, who steered the country through a transformational era from the late 1980s and into the new millennium, died Wednesday at the age of 96, China's state news agency said.

Jiang took power in the aftermath of the Tiananmen Square crackdown and led the world's most populous nation towards its emergence as a powerhouse on the global stage.

"Jiang Zemin passed away due to leukemia and multiple organ failure in Shanghai at 12.13pm on Nov 30, 2022, at the age of 96, it was announced on Wednesday," Xinhua reported.

When Jiang replaced Deng Xiaoping as leader in 1989, China was still in the early stages of economic modernisation.

During his years in power, China's economy grew at an average rate of 9% annually, with military spending increasing by around 15% each year.

Jiang also presided over Hong Kong's return to China from Britain in 1997, after more than 150 years of British rule, even if the territory's return had been brokered by paramount leader Deng Xiaoping in 1984.

By the time he retired as president in 2003, China was a member of the World Trade Organization (WTO), and the country was well on its way to superpower status.

Analysts say Jiang and his "Shanghai Gang" faction continued to exert influence over communist politics long after he left the top job.

He is survived by his wife Wang Yeping and two sons.

Jiang was last seen in public in October 2019 among other former leaders watching a military parade at Tiananmen Square marking the 70th anniversary of the founding of the People's Republic of China.

Under Jiang, China weathered the 1997-1998 Asian financial crisis, joined the WTO in 2001 and won the bid to host the 2008 Summer Olympics in Beijing.

Jiang counted among his proudest achievements the return of Hong Kong to China in 1997 after more than 150 years of British rule, even if the territory's return had been brokered by paramount leader Deng Xiaoping in 1984.

More significant probably was his "Three Represents", a progressive theory with a puzzling name, which helped shape modern China by inviting entrepreneurs - once hounded as the running dogs of capitalism - to join the party. 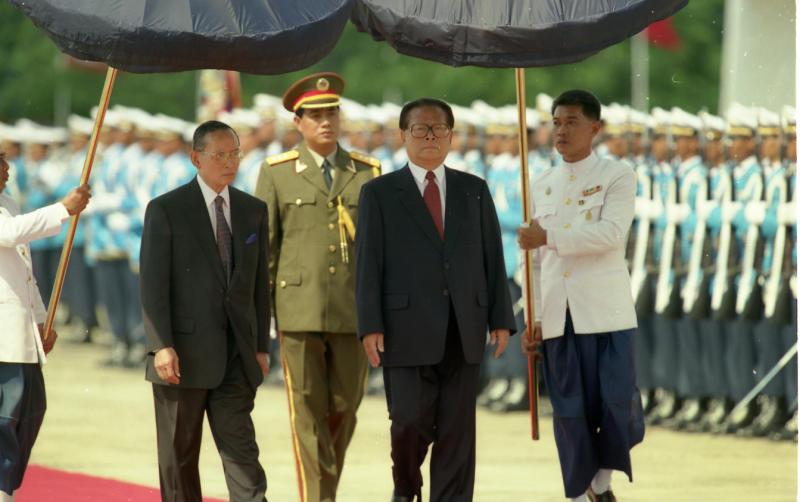 In 1999, then president Jiang Zemin paid a state visit to Thailand at the invitation of the late monarch. (Photo: Tawatchai Kemgumnerd)

Despite rumours that he wanted to cling to power, Jiang retired as party chief in 2002, handing the reins to Hu Jintao in China's first bloodless leadership transition since the 1949 revolution.

His style could surprise his guests, who expected a polished, urbane president but met instead a gregarious ex-automobile factory manager who would sometimes burst into song, recite poems or play musical instruments.

"He had a personal style that was sometimes a bit extravagant. I think he was more of a human being than Hu Jintao," said Jean Pierre Cabestan, a politics professor at Hong Kong's Baptist University.

"Jiang Zemin was more ready to be natural, even though sometimes it could be perceived as vulgar, not very sophisticated."

The Soviet-trained technocrat was a relative unknown when he was tapped by Deng while serving in Shanghai to take over the reins of power.

Jiang was widely seen as a compromise candidate when he replaced reformer Zhao Ziyang, toppled by hardliners for sympathising with the democracy movement crushed by the army around Beijing's central Tiananmen Square in June 1989.

At that time, many compared Jiang to Chairman Hua Guofeng, Mao's chosen successor, who was ousted by Deng in the late 1970s after a few short years at the helm. But Jiang hung on, adding the presidency to his list of titles in 1993.

Zealous for neighbouring, self-ruled Taiwan to accept Chinese sovereignty, Jiang menaced the island with war games and missile tests in the run-up to its first direct presidential election in 1996, souring bilateral relations for more than a decade.

In 1997, Jiang made an ice-breaking trip to the United States.

"American poet Longfellow once wrote, 'But to act that each tomorrow finds us farther than today ... Act, act in the living present'," he told then-US President Bill Clinton, speaking in English.

"We should go along with the trend of the times, and respond to the will of the people, and continue our march forward towards the establishment and development of a constructive, strategic partnership," he said.

Jiang managed crises in Sino-US relations after the 1999 Nato bombing of Beijing's embassy in Belgrade and the 2001 collision between a Chinese jet fighter and a US spy plane in Chinese airspace, which plunged bilateral ties to their lowest ebb since diplomatic contact was re-established in 1971.

In 2002, Jiang was one of the few world leaders to meet US President George W. Bush at his ranch in Crawford, Texas.

China's transformation under Jiang did come with serious problems. Political reform stagnated and freedoms were curbed.

Jiang presided over year after year of spectacular growth, but the wealth gap widened, corruption worsened and social unrest grew, forcing his successor, Hu, to champion the have-nots of society. 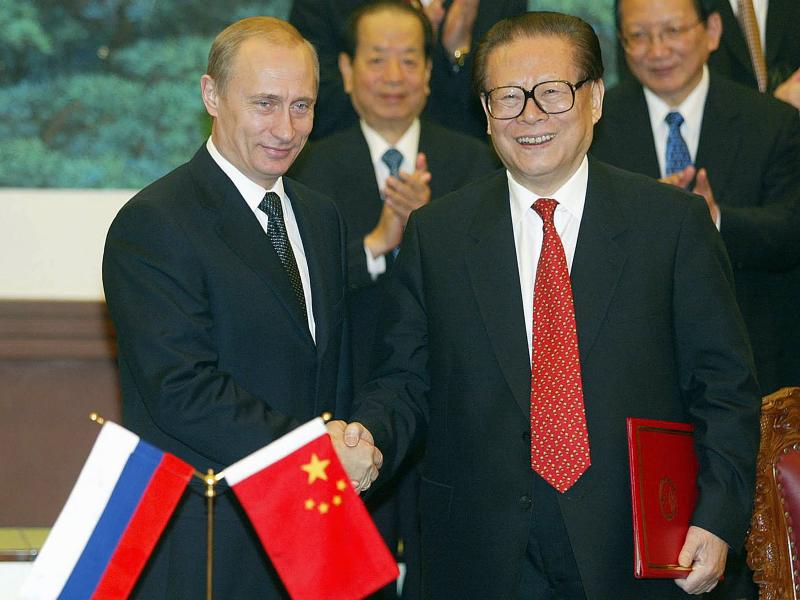 On Tibet, Jiang was reluctant to deal with the Dalai Lama, the region's exiled spiritual leader, who had anointed a six-year-old boy as the second most senior monk in Tibetan Buddhism. China placed the child under house arrest in 1995 and named another boy as the 11th Panchen Lama.

Jiang also banned the Falun Gong spiritual group as a cult in 1999 after about 10,000 of its members besieged the Zhongnanhai leadership compound in Beijing.

In many ways, Jiang took his cue from the late Mao Zedong, the founder of Communist China.

He did little to discourage the comparison. At celebrations for the 50th anniversary of the People's Republic in 1999, floats carried giant portraits of Mao, Deng and Jiang past Tiananmen Square.

Mao took a swim in the Yangtze river in 1966 to show he was still fit at 73. When Jiang visited the United States in 1997, he took a dip at Hawaii's Waikiki beach.

Mao, many Chinese say, was a gifted poet. Newspapers splashed one of Jiang's poems across their front pages in 1999.

Jiang, like Mao, wore his trousers well above his waist and brushed his hair straight back.

He loved to sing, and sometimes engaged in impromptu sing-a-longs with foreign leaders. He could also display a temper.

In 2000, the usually jocular president gave a furious dressing down to Hong Kong journalists for asking whether the territory's then-leader, Tung Chee-hwa, was "the Emperor's choice" to serve for another five-year term.

"The media must raise its knowledge, do you know that? Your questions are too simple, sometimes naive!" Jiang shouted.

While successful economically, China under Jiang stagnated politically. Reform debates from the 1980s were crushed by a fear of instability after the Tiananmen protests and the collapse of the Soviet Union.

Still, he did earn his place in China's socialist pantheon. His "Three Represents" theory was written into the party constitution in 2002, alongside the hallowed Mao Zedong Thought and Deng Xiaoping Theory.