"We came here to resist," said Arassari, a Pataxo Indian. Just next to Rio's mythical Maracana soccer stadium, the venue for the 2014 World Cup final, dozens of Brazilian Indians are fighting to keep control of a rundown building the authorities want to turn into a shopping mall. 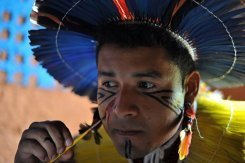 Arassari, Brazilian Indian from the Pataxo tribe from Bahia, paints his face in the garden of the former Indian museum in Rio de Janeiro in 2011. Indians occupy the old museum, which is to be converted in a shopping centre for the 2014 football World Cup. The Indians want to keep the building to create the first Indian university.

Since 2006, members of Indian tribes including the Guajajaras, Pataxos, Tukanos, Fulnio and Apurinas have been living in mud huts around the dilapidated structure, which once housed the Museum of the Indian.

Arassari's face is painted, he wears a straw skirt, a big red bead necklace and red and yellow feathered headgear.

"We are fighting a verbal, physical and moral war. The warrior must not be afraid."

Some 100 meters away, the 83,000-seat Maracana is undergoing renovation at a cost of $338 million. But work has been hit by delays caused in part by strikes over wage levels, working conditions and health benefits.

The renovation of Maracana, as well as that of arenas in 11 other Brazilian host cities for the World Cup, is supposed to be completed by December 2012, well ahead of the final on July 13 2014.

City officials want to turn the area into a shopping mall or an annex to the Sports secretariat.

But the Indians want it as the headquarters of the city's first indigenous academic institution where ancestral skills, Indian history and culture would be taught.

In what has become known as Maracana Village, Indians are growing fruit and vegetables and cooking on a log fire.

The site attracts Indians from all over Brazil who come to Rio to work, study and receive medical care.

"We have always been excluded and when they remember us it is always in connection with the past, when they discuss the arrival of the Portuguese and colonization," said Carlos, a Tukano Indian chieftain who leads the occupation.

And now the same thing could happen in relation to the World Cup, they argue.

"We fear that our people may be excluded from this great event," said Dava, a member of the Puri tribe of central Brazil.

"We fear we may be expelled. We know it could happen."

They have created a website to publicize their projects and hope to launch online television in 2012.

"We want to show Brazilians that Indians are not all the same, that there is a huge cultural and ethnic diversity that needs to be valued and protected," said Afonso, an Apurina Indian.

Indigenous people number only 800,000, or 0.4 percent of Brazil's 190 million people, according to official data.

In 1865, land was granted for construction of a research center for Indian studies.

In 1953, the building housed the first Museum of the Indian, but in 1977, when the museum was transferred to the Botafogo district, it was abandoned and turned over to the agriculture ministry.

Last year, the Rio state government informed Afonso that it planned to tear down the structure and build sports shops. Under the best circumstances, the Indians would get some of the shops to sell handicraft, it added.

Another option under consideration is selling the building to the Rio state's sports secretariat.

Municipal authorities refused to comment on the case and the Rio state government would only say that it was in talks with the agriculture ministry to buy the land.

According to non-governmental organizations, more than 2,000 people have been evicted across Brazil to make way for work linked to the 2014 World Cup and the 2016 summer Olympics.

Kyrgyz lawmakers back seizure of Canadian-run gold mine