A top official in Tibet's capital has asked authorities to dispatch police to monasteries and step up security on main roads after violent clashes in Tibetan-inhabited areas left at least two dead. 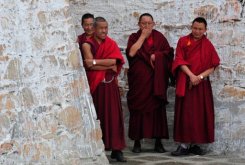 Photo illustration of Tibetan monks outside the Sera monastery in Lhasa, Tibet. A top official in Tibet's capital has asked authorities to dispatch police to monasteries and step up security on main roads after violent clashes in Tibetan-inhabited areas left at least two dead.

Qi Zhala, Lhasa's Communist Party chief, also ordered a crackdown on "separatist" activities he linked to Tibet's exiled spiritual leader the Dalai Lama and said maintaining stability in the city would be hard.

His comments come just days after the neighbouring province of Sichuan -- which has big populations of ethnic Tibetans, many of whom complain of oppression under Chinese rule -- was rocked by deadly clashes last week.

"From today onwards, the maintenance of stability in Lhasa will be an arduous task," Qi said in a speech to police forces posted on the Lhasa government website.

"We must strike hard at all the separatist, destructive and criminal activities of the Dalai clique and make efforts to realise our goal of not letting any incident, big or small, occur," he said in comments posted Monday.

"Lhasa officials and functionaries at all levels, especially the police, must increase ... efforts to rationally dispatch police forces and step up registration and inspection work along national roads, at key monasteries and among leading suspects."

Qi's comments come with authorities on high alert over next month's Tibetan New Year, as well as the March anniversary of a 1959 failed uprising against Chinese rule in Tibet, which prompted the escape of the Dalai Lama.

He made the speech in Tibet's Mozhugongka county, which sits along a remote mountain road linking Lhasa with Sichuan -- where rights groups say three Tibetans died and dozens were hurt last week when police fired at protesters.

The government says two people died, and blames the incidents on violent protesters.

The official Global Times, citing a Lhasa official, said "police officers will be stationed at temples located in remote areas to further ensure the region's stability."

Exiled Tibetans have long claimed that China has set up an official presence in monasteries to weed out supporters of the Dalai Lama, whom it accuses of wanting to split Tibet from the rest of China.

But the 1989 Nobel Peace Prize winner has repeatedly denied such accusations and insists he is only seeking greater autonomy for Tibetan-inhabited regions of China.

Biden tries to get Americans excited by his infrastructure success