Across southern Florida, rabbits, raccoons, bobcats and foxes have been disappearing at dramatic rates over the past decade, and invasive Burmese pythons are to blame, a US study said. 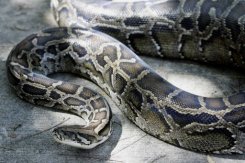 A Burmese python is seen in south Miami, Florida, in 2005. Across southern Florida, rabbits, raccoons, bobcats and foxes have been disappearing at dramatic rates over the past decade, and invasive Burmese pythons are to blame, a US study said Monday.

The big snakes which are native to southeast Asia have been devouring all kinds of wildlife leading to "severe declines" in once common animals, said the study in the Proceedings of the National Academy of Sciences.

The United States formally banned the import of Burmese pythons earlier this month, but the study suggests they have already caused enormous damage to the ecosystem in the Florida Everglades with unknown implications for the future.

The research was based on data from surveys in which dead and live animals are counted along roadways.

From 1993-1999, before the invasive snakes had established a population in south Florida, raccoons, opossums and rabbits were the most frequent roadkill.

But from 2003-2011, surveys spotted a 99.3 percent decrease in racoons, 98.9 percent fewer opossums and no rabbits or foxes, said the article authored by Michael Dorcasa at Davidson College in North Carolina and colleagues at the Department of Fish and Wildlife Conservation and the National Park Service.

These "severe apparent declines in mammal populations... coincide temporally and spatially with the proliferation of pythons in Everglades National Park," said the study.

During that period, annual removals of Burmese pythons have risen from less than 50 per year to 300-400 annually.

Raccoons, opossums, bobcats, deer and rabbits have all been "documented in the diet of pythons in Everglades National Park," added the study.

Raccoons and opossums may be particularly vulnerable because they forage at the water's edge where the pythons lurk, while other animals like deer and bobcats may be unaware of the danger posed by these unfamiliar snakes.

Just how the Burmese pythons made their way into the Everglades is uncertain, though some blame pet owners who set their snakes free when they grow too large.

Others believe the population began to take root after Hurricane Andrew swept through the region in 1992, destroying some pet stores and setting baby pythons free in the wetlands near Florida's pristine tourist beaches.

The changes to the ecosystem remain "complex and difficult to predict," said the study, noting that while nuisance reports about raccoons have dropped way off, there are mounting concerns the snakes could be eating endangered birds and other rare animals, too, such as wood storks and Key Largo woodrats.

The decline in foxes and bobcats could be due to the snakes eating them, or they could be starving due to disappearing small prey like rabbits.

Some species may rebound, such as crocodiles, turtles and birds, since there are fewer racoons to feast on their eggs.

But overall, more study is needed to understand the shifts in animal populations due to the introduction of a new top predator, the authors wrote.

"Whether mammal populations will remain suppressed or will rebound remains to be seen. The magnitude of these declines... justifies intensive investigation into how the addition of novel apex predators affects overall ecosystem processes."

Invasive species are a top threat to global biodiversity and the battle against them costs 120 billion dollars per year in the United States alone.