Thai authorities charged two Iranians on Wednesday over an alleged bomb plot against Israeli diplomats, officials said, piling pressure on Teheran over accusations of a terror campaign against the Jewish state.

Authorities said they had laid criminal charges against two Iranian suspects accused of involvement in the three  blasts in central Bangkok yesterday.

One of the men -- named as 28-year-old Saeid Morati -- lost both legs after he hurled an explosive device at police while fleeing an earlier blast at a house in the capital. The satchel containing the bomb, which he threw at a police vehicle, bounced off another vehicle and exploded at his feet. 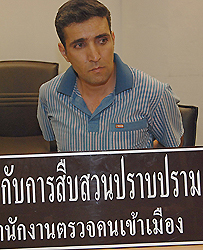 A second Iranian suspect, Mohammad Hazaei, was detained trying to board a flight out of the country at Suvarnabhumi airport. A third Iranian suspect is believed to have fled to Malaysia, officials said.

"These three Iranian men are an assassination team and their targets were Israeli diplomats including the ambassador," a senior Thai intelligence official told AFP, speaking on condition of anonymity.

"Their plan was to attach bombs to diplomats' cars."

Explosives and magnets were later found inside the partially destroyed house where the first explosion occurred,  police said.

The two suspects were charged with causing an illegal explosion and attempting to kill police officers and members of the public, Foreign Minister Surapong Tovichakchaikul told reporters.

"We cannot say yet if it's a terrorist act," he said, "but it's similar to the assassination attempt against a diplomat in India."

Pol Gen Priewpan, accompanied by Pol Lt-Gen Wiboon Bangthamai, the Immigration Police chief, was speaking after being present at the questioning of the suspect, in the presence of an official from the Iran embassy and an interpreter.

Although the man denied any involvement, police had sufficient evidence, including eyewitnesses and forensic examination results, to take legal action against him, Pol Gen Priewpan said.

He said police also knew the identity of the third suspect who fled to Malaysia on a 10.20pm flight on Tuesday.  Malaysian police had been asked to arrest the suspect, he added.

The three suspects were initially allowed to enter the country because they were neither blacklisted nor had criminal records, Pol Lt-Gen Wiboon said.

He said a woman who had reportedly accompanied the suspects and was believed to be the girlfriend of one of the men had left the country.

It was believed she had nothing to do with yesterday's incident, he added. 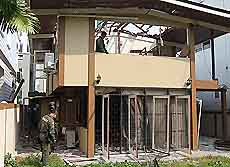 Pol Lt-Gen Wiboon said Hazaei was being detained at the Immigration Police headquarters while Morati was being treated at Chulalongkorn hospital. minus his legs.

Deputy Prime Minister Chalerm Yubamrung said he did not believe the three bomb blasts yesterday were linked with the Hezbollah terrorist group. The bombs were not designed for large scale destruction. They had not been detonated by timers.

"It was not a terrorist act, it was just an act to demonstrate some insignificant symbol," said the former police captain.

"I would like to tell everyone that Thai officials in all sectors are in control of the situation and there's nothing to be worried about," Mr Chalerm said.

Thai intelligence officials were not at fault as the bomb suspects arrived in Thailand unarmed and had built their weapons inside the country, he said.

Israel accused Iran of orchestrating attacks on Israeli embassy staff in India and Georgia on Monday.

An Israeli diplomat in New Delhi suffered grave shrapnel wounds when a motorbike assailant attached a bomb to her car on Monday.

Iran, which has already denied responsibility for the Delhi and Tbilisi incidents, said it had no link to the Bangkok blasts and blamed what it called "elements linked with the (Israeli) Zionist regime".

Observers, however, noted that the use of motorbike assassins to blow up targets' cars closely mirrored the method used to murder nuclear scientists in Iran in the past two years, raising the possibility of Iranian payback and a vicious covert war between the Middle East foes.

Thai police said explosives and magnets were found inside the house in a residential area of Bangkok where the first blast occurred, shattering windows and causing the roof of the building to collapse.

"I saw two Middle Eastern looking men covered with blood run out from the house," said Da Klond, a housemaid living opposite. "Broken glass was thrown across the street and fell in our garden."

Bangkok has been on the watch for a terror attack since police last month charged a Lebanese man suspected of planning a strike, following a US warning that tourist areas might be targeted.

National Security Council secretary-general Wichean Photephosree said the bombs that exploded around Sukhumvit soi 71 were most likely intended for use in attacking individuals, not for terrorism or sabotage, and were not powerful enough to cause large-scale destruction.

He said the materials used in making the bombs did not point to a large scale attack.

Whether Tuesday's incident was linked to the seemingly coordinated attacks on Israeli diplomats in Georgia and India the previous day was being investigated, Pol Gen Wichean said.

He said it was also not known if it was linked to Atris Hussein, the Lebanese man with suspected links to the Hezbollah militant group who was arrested by Thai police at Suvarnabhumi on Jan 12. 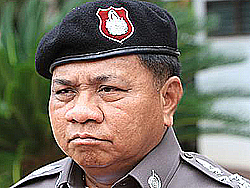 "It's happening not only in Thailand but also elsewhere."

The explosions came a day after bombers targeted Israeli embassy staff in the capitals of India and Georgia, with a female diplomat seriously wounded in New Delhi, in attacks that were plotted by Iran, according to Israel.

Foreign permanent secretary Seehasak Puangketkaew said he would consult with Foreign Minister Surapong on whether to invite ambassadors based in Bangkok to a briefing on the bomb explosions in Bangkok yesterday and to reassure them of the capability of the Thai security agencies.

Pol Gen Wichean's press statement after the NSC meeting would be posted on the Foreign Ministry's website so that other countries could have confidence in Thailand, now the United States and Britain had reissued a travel warning to their citizens, Mr Seehasak said.

Israel accused Iran of orchestrating attacks on Israeli embassy staff in India and Georgia on Monday.

Israel's ambassador to Thailand, Itzhak Shoham, said the Bangkok suspects appeared to be "part of the same network" that targeted Israeli embassy staff in India and Georgia.

The United States condemned the Bangkok blasts and voiced concern about a worldwide "uptick" in such violence, including some with alleged links to Iran.

The Bangkok blasts are another blow to the kingdom's tourist-friendly image, which was badly dented last year by devastating flooding across much of the country, as well as rounds of rival political protests in recent years.