Nigerian Islamist gunmen bombed their way into a prison in central Nigeria before opening fire on wardens and emptying the jail of 119 inmates, officials and a sect member said Thursday. 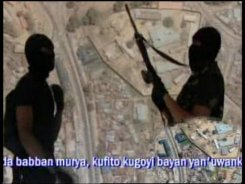 A view of the central prison in the northern Nigerian city of Bauchi in 2010. Nigerian Islamist gunmen bombed their way into a prison in central Nigeria before opening fire on wardens and emptying the jail of 119 inmates, officials and a sect member said Thursday.

One prison warden was killed when a shootout erupted during Wednesday's jail break in the central state of Kogi in a raid claimed by a purported spokesman of the Boko Haram sect which has been wreaking deadly havoc in Nigeria.

"From reports available to us, a large number of gunmen attacked the Koton Karfe prison around 7:00 pm and threw explosives at the gate and opened fire on our wardens," said state prison spokeswoman Hadiza Aminu.

She said a shootout then erupted.

"One of our men was killed and the gunmen overpowered the wardens and broke into the cells, freeing inmates," Aminu told AFP.

"The inmates that escaped were 119 because there were 120 inmates in all. Only one remained," she said, adding: "We have so far re-arrested 25."

She declined to speculate on the identity of the attackers.

"We still don't know who was behind this attack. Investigations have commenced to determine that."

But a man going by the name of Abul Qaqa and claiming to speak on behalf of Boko Haram said the group staged the raid in a bid to free seven of its members.

"We staged the operation to rescue seven of our members there and Allah made it possible for the operation to be successful," Qaqa told reporters in a conference call in the northeastern Maiduguri city, the sect's home base.

"They are safely in one of our camps," Qaqa added.

Boko Haram has been blamed for a wave of increasingly bloody gun and bomb attacks in several parts of Africa's most populous country in recent months, mostly in the Muslim-dominated north.

Residents had speculated that the sect must have been responsible for Wednesday's jail break.

"From all indications, the attackers were members of Boko Haram," said Isiaka Yakub, adding that there were around 20 of them.

In the most audacious and deadly attack blamed on Boko Haram, at least 185 people were killed last month in a wave of shootings and bombings in northern Kano city, Nigeria's second largest city.

The spiralling violence has sparked deep concern in the international community and shaken the country, whose 160 million population is roughly divided between the mainly Muslim north and predominantly Christian south.

Kogi state lies on the so-called middle belt between north and south. The state also borders the capital Abuja where Boko Haram bombed the UN headquarters in August 2011, killing 25 people.

The sect, whose name means "Western education is sin", launched an uprising in 2009 put down by a brutal military assault that left some 800 people dead. After going dormant for about a year, it re-emerged with a series of shootings and bomb blasts.

There has been intense speculation over whether Boko Haram has formed links with outside extremist groups, such as Al-Qaeda's north African branch and Somalia's Shebab rebels.