Portsmouth went into administration on Friday for the second time in two years, leaving the former Premier League club facing a battle against relegation after also being docked 10 points. 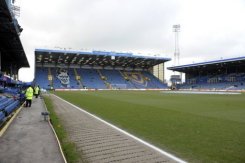 Empty grandstands at Fratton Park in Portsmouth, 2010. Portsmouth went into administration for the second time in two years, leaving the former Premier League club facing a battle against relegation with a hefty points deduction looming.

A High Court hearing in London confirmed Portsmouth had gone into administration at 1115GMT, a development which brought with it an automatic 10-point penalty from Football League chiefs.

"This sanction has been implemented with immediate effect following formal confirmation that the club is in administration. Portsmouth have seven days in which to appeal.

"The Football League will now begin dialogue with the administrator aimed at achieving a successful sale of the club and its continuation in league football."

Portsmouth face a winding-up hearing next week over an unpaid tax bill, while players and staff at the club have not been paid since January. The club's debts have been estimated at around