Test great Shane Warne will be inducted into the Australian Cricket Hall of Fame this week, Cricket Australia said on Sunday. 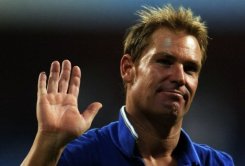 Test great Shane Warne, pictured here in May 2011, will be inducted into the Australian Cricket Hall of Fame this week, Cricket Australia said on Sunday.

The legendary leg-spinner, the first cricketer to take 700 Test wickets, will be inducted at the Allan Border Medal ceremony in Melbourne on Monday, CA said.

Hall of Fame chairman David Crow said Warne, 42, who retired from Test cricket in 2007, was the selection committee's unanimous choice.

"Shane Warne's contribution to cricket has been enormous," Crow said. "He revived legspin, combining accuracy with variety and enormous turn, even on unhelpful pitches.

"It was the timing of his performances -- in addition to his sheer weight of wickets -- that further underlined his legendary status.

"Beyond his phenomenal record, Shane Warne changed the way cricket was played and has inspired a new generation of cricketers worldwide to take up the challenging craft of spin bowling."

Warne said he was surprised and delighted to be inducted into the Hall of Fame and would fly from the United States to attend the ceremony in Melbourne.

"To be inducted into the Hall of Fame is just a massive honour, and it makes me feel very proud. I'm glad I'm sharing this with my children and my family," Warne said in a statement.