Drug-related violence has surged to "alarming and unprecedented" levels in Central America as Mexican drug cartels have shifted their operations, a UN report said Tuesday. 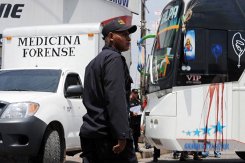 Police personnel surround a public bus whose driver lies on his seat after being shot dead by hitmen, in Tegucigalpa, Honduras, in 2010. Drug-related violence has surged to "alarming and unprecedented" levels in Central America as Mexican drug cartels have shifted their operations, a UN report said Tuesday.

The move "has resulted in increased levels of violence, kidnapping, bribery torture and homicide" in Central America, the annual report by the International Narcotics Control Board said.

"In Central America, the escalating drug-related violence involving drug trafficking organizations, transnational and local gangs and other criminal groups has reached alarming and unprecedented levels, significantly worsening security and making the subregion one of the most violent areas in the world," the report said.

"The countries of the so-called 'Northern Triangle' (El Salvador, Guatemala and Honduras), together with Jamaica, now have the world's highest homicide rates," it said.

Honduras, Costa Rica and Nicaragua were identified in 2010 for the first time as major transshipment points of illegal drugs flowing into the United States. Guatemala was singled out in the report as a transit area for cocaine smuggled into Mexico.

Adding to the high level of violence is the ready availability of firearms and a proliferation of street gangs or "maras" -- more than 900 with 70,000 members in Central America, it said.

"The drug problem has also led to drug-related corruption, which has increasingly weakened the criminal justice systems in Central America and the Caribbean," the report said.

"Drug funds and corruption in the security services have become entrenched in Central America, paving the way for other forms of organized crime, including trafficking in firearms," the report said.

US Homeland Security Secretary Janet Napolitano, on a visit to El Salvador as part of a regional swing on drug policy, meanwhile said Tuesday each country has things they should do individually as well as jointly to perform better in the fight against illegal drugs.

According to US data, 90 percent of cocaine shipped from South America to the lucrative US market passes through Central American nations like his.

In Mexico, meanwhile, drug cartels have responded to a six year old government crackdown with "unprecedented levels of violence," the report said.

"In addition, drug syndicates have sought to undermine the state apparatus, including federal and state police, the criminal justice system and the media through the use of corruption, as well as threats and intimidation," it said.

The report acknowledged the Mexican government's "strong commitment" to take decisive measure to deal with drug-related measures, but was silent on whether its strategy was working.

Potential heroin production in Mexico is believed to account for nine percent of the world total. Mexico is also an important methamphetamine producer.

As the world continues to be hampered by the pandemic, digitalisation will gather pace with anti-loneliness tech, green tech, user-friendly security solutions, society-as-a-service modes and digital literacy for all becoming key tech trends to watch this year.