Laos is ending gambling in the former casino enclave of Boten on the Chinese border because of worries about crime, state media said Wednesday. 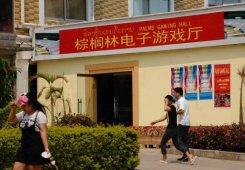 Chinese people walk outside a casino in the border town of Boten in 2011. Laos is ending gambling in the former casino enclave of Boten on the Chinese border because of worries about crime, state media said Wednesday.

"There has been speculation over criminal activity in the gambling town, which forced the government to close the casino," the Vientiane Times reported, without saying when the business was shut.

Laos plans to take greater control of security at the site and strip the Boten management of some powers, reclassifying the area as a "special economic zone," the report said.

Boten emerged as a gambling hub over recent years, with the casino and a number of garishly-coloured hotels springing up to cater exclusively for Chinese clientele, often working on infrastructure projects in the area.

Gambling is illegal in China, except in Macau.

The Laos government decided to act when the project's developer began looking into selling the venture to another Chinese investor, the Vientiane Times said.

The new investors will not operate a casino in the area, the report said, but will instead develop the area into "a tourism destination," it said.

"The government will not allow any more special economic zones to contain casinos, after finding such operations created serious problems for Laos, especially in regard to security," the report said.

The decision will not affect another casino in the Golden Triangle Special Economic Zone, which is on the border between Laos, Myanmar and Thailand.