Mali's Tuareg rebels pressed on with an offensive in the north as mutinous soldiers faced a global backlash for staging a coup over the government's handling of the insurrection. 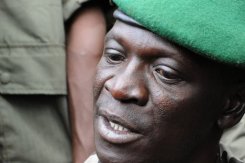 Mali junta leader Captain Amadou Sanogo speaks at the Kati Military camp, in a suburb of Bamako, March 22. Mali's Tuareg rebels pressed on with an offensive in the north as mutinous soldiers faced a global backlash for staging a coup over the government's handling of the insurrection.

The African Union temporarily suspended Mali, Europe froze aid and the United States threatened to follow suit amid a chorus of condemnation over the coup in a country key to fighting drug trafficking and extremism.

But AU officials will travel to Mali for talks with the coup leaders in a joint delegation with the Economic Community of West African States (ECOWAS) next week.

The coup opened the way for Tuareg rebels to deepen their hold on the north, with their National Movement for the Liberation of Azawad (MNLA) saying it had seized the town of Anefis between the key cities Gao and Kidal.

The MNLA said on its website it would continue to press its offensive as part of its military campaign for a homeland in the north of the west African nation.

It was the Tuareg rebellion that sparked the coup by soldiers, who say they have been ill-equipped to fight off the desert nomads,

The Tuareg force has been strengthened by the return of heavily armed fighters who previously fought for Libya's slain dictator Moamer Kadhafi.

On Wednesday, army troops attacked the presidential palace and seized state institutions, before appearing on television to announce they had toppled the "incompetent" regime of President Amadou Toumani Toure.

On Friday, Mali's coup leaders again took to television to deny reports of the death of their leader, Captain Amadou Sanogo.

Earlier, Sanogo himself reassured journalists that Toure was "doing very well", and that members of the government arrested by soldiers were safe.

"We will not touch a hair on their heads. I will hand them over to the courts so that the Malian people know the truth," insisted the green-beret officer, who says he has spent time at training programmes in the US.

In separate comments to the BBC, he insisted he would stand down once he had ensured the army was properly equipped to tackle the Tuareg rebellion.

The problem at the moment was "a lack of equipment, a lack of training and our comrades are dying all the time," he said.

"So once this has been fixed, I'll be able to say 'Ok, go for election' in a short period of time. I promise."

Rights group Amnesty International said that at least three people had been shot dead and 28 wounded in Thursday's coup, while the local Red Cross said it had treated 40 people, mostly for bullet wounds.

Few people ventured out of their homes in the tense capital Bamako Friday, where some soldiers had turned to looting.

The international community has acted swiftly against the junta.

The AU Peace and Security Council announced it was suspending Mali until the government had been restored, said Paul Zolo, Nigeria's envoy to Ethiopia and the AU.

AU Commission chief Jean Ping said the AU and ECOWAS would send a joint team to Mali to seek a return of constitutional order.

And the heads of ECOWAS were due to hold a special meeting in Ivory Coast's main city Abidjan on Tuesday, a source in the Ivorian ministry for African integration said.

The EU's executive arm said it was suspending development work as its foreign ministers called for the return of civilian rule, but direct support to the population and humanitarian aid would continue.

Drought means that Mali is threatened with a food crisis.

The World Bank and the African Development Bank suspended aid after the coup, Mali's first in 21 years, and the US threatened to lift $70 million in military and economic aid if constitutional rule was not returned.

Twelve Malian political heavyweights condemned the coup, which came just five weeks before a presidential election in which Toure had been due to step down.

Mali is usually seen as politically stable, but unrest in the north, where Tuareg tribes have long felt ignored by a southern government and where Al-Qaeda has also taken root, has created a major security problem.

Under Toure's leadership, Mali had been hailed as a growing democratic success, but in mid-January the Tuareg launched a fresh rebellion aimed at winning independence, which has seen up to 206,000 people flee their homes.