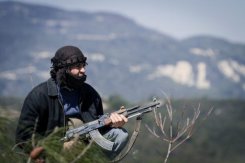 Medvedev's stark message to Moscow's traditional ally came only hours after US President Barack Obama announced plans to send "non-lethal" aid to the Syrian rebels and as new waves of violence swept the battle-scarred country.

Dozens were killed in fighting on Sunday as the Syrian army pressed its assault on protest hubs, with at least 18 civilians among the dead, according to activists and monitors.

Russia has been facing mounting Western and Arab calls to step up pressure and stop delivering arms to President Bashar al-Assad's regime after a year of violence that the opposition says has claimed more than 9,100 lives.

Moscow on Wednesday backed a non-binding Security Council statement after vetoing two previous resolutions. But it did so only after making sure the text contained no implicit threat of further action should Assad fail to comply.

Medvedev on Sunday appeared to be aiming his words at Assad directly by warning of dire consequences if Damascus ignored Annan's peace plan.

"This may be the last chance for Syria to avoid a protracted and bloody civil war," Medvedev told Annan at a meeting held in Moscow's Vnukovo 2 airport before his departure for a summit in Seoul.

"We will be offering you our full support at any level at which we have a say," said Medvedev.

"We very much hope that your efforts have a positive outcome."

Annan replied that he expected Russia to play an "active" role in making sure that both sides follow the points of the UN Security Council-backed initiative.

The UN-Arab League envoy was expected in China on Tuesday to shore up backing for his efforts from the two UN Security Council members that had blocked previous efforts to condemn Assad's regime.

China has also expressed support for Annan's mission amid signs of quickly waning support for Assad from his traditional friends.

The UN Security Council-backed peace plan requires Assad to pull back his forces from protest cities and provide immediate humanitarian access to the thousands of civilians trapped inside.

It also makes no explicit demands on the opposition and calls for a gradual transition to a more representative government in which Assad's role remains undefined.

Russia's Deputy Foreign Minister Gennady Gatilov wrote on Twitter after the Annan meeting that "the (Syrian) authorities appear to be ready to carry this out."

Moscow has in recent weeks tried to play down its sway over Assad by accusing him of "making a lot of mistakes" and noting that he often refused to listen to Russia's suggestions on ending the crisis.

Western powers have also doubted Assad's desire to negotiate -- the Syrian leader has shown few signs of complying with Annan's peace plan -- and have been calling for his ouster since last year.

The Arab League's secretary general Nabil al-Arabi however said he did not expect a call for Assad's resignation to come up at the group's annual summit in Iraq later this month.

talks in SeoulPressure on Assad mounted considerably when Obama and Turkish Prime Minister Recep Tayyip Erdogan emerged from extended to announce their decision to back the delivery of non-combat supplies to the opposition.

Russia's foreign ministry countered immediately that such "support for one side of the conflict was unacceptable."

The move was nevertheless expected to be backed formally at a "Friends of Syria" meeting scheduled for April 1 in Istanbul.

Syria's Muslim Brotherhood said a meeting of Syrian opposition factions in Istanbul this week, ahead of next Sunday's gathering, would unify the majority of dissident groups that until now have been unable to present a common front.

"Ninety percent of the opposition parties will be united by April 1, under the umbrella of Syrian National Council," the Islamist group's leader Mohammad Riad Al Shaqfa told a news conference.

Obama also said the United States and Turkey had agreed that "there should be a process" of transition to a "legitimate government" in Syria.

There was no let up in the fighting on Sunday, which left some 30 people dead, including at least 18 civilians, with monitors and activists reporting violence stretching from the outskirts of Damascus to Syria's northern border with Turkey.

And in the northwest province of Idlib, regime troops reportedly killed seven civilians, including three children, in the town of Saraqeb and in Kaframim village, where they torched the houses of dozens of fleeing rebels.

Another five civilian were killed in the northern city of Hama on Sunday, while the LCC reported three troops and six mutinous soldiers killed in the southern town of Nawa.