A record $640 million US lottery jackpot will be shared by three ticket-holders who clinched the prize after frenzied sales sent the massive windfall soaring ever higher, organizers said Saturday. 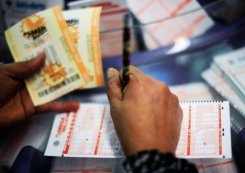 A woman fills out a Mega Millions lottery ticket form at Liquorland in Covina, California on March 30. A record $640 million US lottery jackpot will be shared by three winners who clinched the prize after days of frenzied ticket-buying sent the windfall soaring ever higher, organizers said Saturday.

Millions of Americans had queued up hoping to suddenly become very, very rich despite having only a one-in-176-million chance of winning but with big dreams of gaining a life-changing fortune from the Mega Millions draw.

"Three tickets matched all six numbers in the Friday, March 30, Mega Millions drawing," the company said in a statement, confirming that the winning tickets had been purchased in the states of Illinois, Kansas and Maryland.

Experts have warned that it may be days or even weeks before the winners show up to claim the prize as legal matters stemming from gaining so much money tend to be resolved before people come forward publicly.

Steven White, who won $110 million from the Pennsylvania Lottery in 2004, said pitfalls as well as joys awaited the latest victors.

"People who you thought were confidantes turn out not to be, you just have to be very vigilant and make sure that you take your time," he told Fox News.

"Not everybody has your best interests at heart. We've made a few mistakes, but by and large we've been very, very lucky, throughout the last eight years.

"Good luck to those winners, they're going to need it," he said.

The jackpot hit a record level because no one had matched the magic five numbers and Mega Ball since January 24 -- a full 18 draws with no winner.

Given the pace of ticket buying, the pot climbed inexorably higher and late Friday tickets for the mega jackpot were reportedly selling at the unprecedented rate of $4 million per hour.

None of the winning players have been identified but media reports said the three tickets were sold near Redbud, in Illinois, the city of Baltimore, Maryland, and an undisclosed location in Kansas, respectively.

"It's very important now for whoever has that winning ticket to sign the back of the ticket, put it in a safe place, reach out to us so we can begin the process of awarding the person the prize," he said.

Ticket-buying was feverish at convenience stores and news kiosks across the United States up until late Friday, with plenty of fantasizing on the airwaves and in newspapers about how life would change after winning the record jackpot.

The thought of a win was especially alluring as workers in the United States remain worried by a shaky jobs market in the wake of the 2008 global financial crisis that plunged the country into recession.

The Mega Millions tickets made it unequivocally clear: this was nothing less than "the world's largest jackpot," but the company also cautioned people about going too far in their attempt to win.

"Although most people can play Mega Millions and other lottery games without ill effects, there are some people for whom gambling of any sort can be addictive and very damaging," the lottery's website advised.

"Like other addictions, gambling addiction is a treatable disease."

US media had waded in with advice. CBS suggested hiring an investment adviser, while The New York Post devoted an entire page to demonstrate that the premise of money making you happy does not always stand up.

"Winners beware!" the Post headline said over profiles of four seemingly lucky Americans who went "from jackpot to jack squat."

The profiles included the cautionary tale of Jack Whittaker, who won $315 million in 2002 and lost the lot to thieves and hard living, while his daughter and granddaughter both died from drug overdoses.