The small Japanese fishing town of Minami Sanriku is half a world away from Chile, but the two places share a bond that crosses a vast ocean: Moai statues. 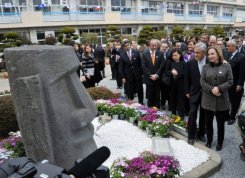 For two decades an enigmatic smiling face, carved locally in the mould of an Easter Island Moai, kept watch over what residents of Minami Sanriku came to know as Chile Plaza.

But when the huge waves of last March's tsunami swamped the town, the statue, like hundreds of buildings, was toppled, its two-metre (six-foot) head knocked off its body.

Much of the town's infrastructure and m ost of its economy was wiped out when the gigantic waves swept ashore, killing 19,000 people along this once picturesque coast.

As the town gradually staggers back to its feet, the statue is providing inspiration, and a glimmer of hope for the future.

When residents began their clear-up after the tsunami, they pulled the still intact head from the rubble of Chile Plaza and hauled it to a local high school, where it now watches the comings and goings of teenagers.

"It was already in this town when I was small, and I would wonder what it was," she said. "But now I know how important it is."

Minami Sanriku's connection with Chile, 17,000 kilometres (11,000 miles) away, dates from 1960, when a 9.5 magnitude earthquake struck the South American country.

More than 1,600 people were killed in Chile and two million were left homeless, but the quake also sent a tsunami hurtling across the Pacific to Japan, where it claimed 142 lives, more than a quarter of them in Minami Sanriku.

Thirty years later, the two disaster-prone communities celebrated each other's recovery, and after a visit from the Chilean ambassador to Japan, Minami Sanriku set up the Moai statue in a coastal park, which local residents named Chile Plaza.

"People loved the statue," said mayor Jin Sato. "It was a symbol of recovery."

The Moai are mysterious human figures found on Easter Island off the coast of Chile, where hundreds of enormous figures -- some as tall as several metres -- still stand in groups.

Ancient islanders are believed to have built the figures, but details such as how they raised the huge stones are unknown.

Now students in the town are using the Moai for a scheme to raise cash to help get their community back on its feet.

The youngsters have designed a series of badges and other trinkets featuring the Moai, which they are selling to raise money to fund a community bus for the town's elderly.

"There are many grandparents in this town, but it's not easy for them to get around. The normal bus is very infrequent," said Yamauchi.

The scheme has won friends in high places.

On a visit to Japan last week, Chilean President Sebastian Pinera took time out from high-level trade diplomacy in Tokyo to visit Minami Sanriku, where he and his delegation toured the devastation all sporting Moai souvenirs.

"This is a symbol of hope for the future," Pinera told AFP, pointing to his steel badge. "In this city, which was so badly hit by the earthquake and tsunami, it's good to see that faith and courage are still alive."

Pinera was so inspired by the town that he has promised them a "bigger, more magnificent and more beautiful" Moai -- this time the genuine article which the president said would be shipped across the Pacific.

Yamauchi and her schoolmates are now developing "Moai-yaki" buns -- sweets with custard or bean paste inside -- which they hope to be able to send to market.

School teacher Yasunori Mogi, 29, said projects like these could prove invaluable experience for youngsters in a town with few job opportunities.

"Unless these children can find their places in this town, we won't be able to rebuild the community in any real sense," he said.

"These projects mean a lot to the students because they give them a good reason to come to school," Mogi said.

"They design the characters and make the items by hand. It really shows their love for the town."

Nobel laureate Maria Ressa: Journalism is 'at an existential moment'