Russian arms smuggler gets 25 years in US prison
World

Russian arms smuggler gets 25 years in US prison

A US judge on Thursday sentenced Russian "merchant of death" arms smuggler Viktor Bout to 25 years in prison for conspiring to sell a massive arsenal to anti-American guerrillas in Colombia. 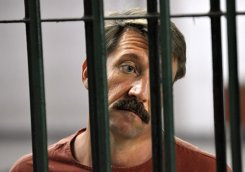 A US judge on Thursday sentenced Russian "merchant of death" arms smuggler Viktor Bout, pictured in 2010, to 25 years in prison for conspiring to sell a massive arsenal to anti-American guerrillas in Colombia.

Bout, 45, has been accused of selling arms to despots and insurgency groups embroiled in some of the world's bloodiest conflicts and was the inspiration for the arms smuggler played by Nicolas Cage in "Lord of War" (2005).

US district judge Shira Scheindlin decided to give Bout the minimum required sentence of 25 years on one count and 15 years for each of the three other counts of which he was found guilty, to run concurrently.

"Twenty-five years is sufficient," Scheindlin said after Bout made a statement to the court, insisting he was innocent.

The sentencing had been delayed twice, with Bout's lawyer demanding more time to prepare his request for leniency and accusing prosecutors of "outrageous government conduct" in allegedly entrapping the Russian.

The Russian -- widely dubbed the "merchant of death" -- was lured to Thailand and arrested there in 2008 at the end of a US sting operation that stretched from the Caribbean island of Curacao to central Europe.

Bout was eventually extradited to the United States and convicted in November on four counts of conspiring to sell missiles to terrorists and to kill US troops.

But his defense attorney has called the prosecution a "disgrace," accusing US agents of entrapment and denying that Bout ever committed any crime against the United States or its citizens.

Bout was "targeted not for investigation, for this was not an investigation -- it was a foregone conclusion," attorney Albert Dayan wrote in a letter Wednesday to Scheindlin.

The sentencing was originally planned for March 12.

US agents posing as members of the leftist Revolutionary Armed Forces of Colombia (FARC), a US-designated terrorist organization, lured Bout to Thailand from his native Russia, where he was under government protection.

In Bangkok, they pretended to be seeking infantry and anti-aircraft missiles to shoot down American pilots helping the Colombian military.

In secretly taped conversations, Bout said he could supply the weapons. However, his lawyer said in court he was playing a charade in order to further his real goal, which was simply to sell two cargo planes.

The mustachioed Russian is widely believed to have been the world's biggest black market arms dealer in the post-Cold War period, specializing in arming African warlords and dictators.

"The sentencing of Viktor Bout sets a global precedent in the battle to put illegal arms traffickers out of business," said Kathi Lynn Austin, executive director at Conflict Awareness Project.

"However, we should not fool ourselves that there are not others out there in line to fill his shoes," she added in a statement, calling for a strong international Arms Trade Treaty.

He is not wanted for any crime in his native Russia, which has called for his return and cast doubt on the fairness of his conviction.

Scheindlin ruled in February in favor of an appeal by Bout's lawyers to let him out of solitary confinement for the first time in 15 months.