Pakistan barred the head of an airline whose jet crashed near Islamabad from leaving the country on Saturday as it began an investigation into the disaster that sparked anger among distraught relatives. 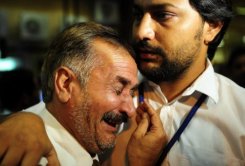 A Pakistani man mourns over the coffin of a relative killed in a plane crash in Pakistan, at a hospital in Islamabad on Saturday. Pakistan barred the head of the airline from leaving the country as it began a probe into the disaster that sparked anger among distraught relatives. The Bhoja Air flight from Karachi came down on Friday evening, killing all 127 people on board.

The Bhoja Air flight from Karachi came down in fields near a village on the outskirts of the Pakistani capital on Friday evening, killing all 127 people onboard, in the city's second major fatal air crash in less than two years.

Interior minister Rehman Malik said a committee had been set up to investigate the crash and the head of the airline Farooq Bhoja had been put on an "exit control list", meaning he is banned from leaving Pakistan.

Civil Aviation Authority (CAA) officials said the second-hand Boeing 737-200 was nearly 30 years old, but an airline spokeswoman said the plane's age had no bearing on the tragedy, which happened as a thunderstorm hit the city.

"The aircraft was old and second hand but it is not something unusual. The fleet of state-run Pakistan International Airlines (PIA) also runs old aircraft," Bhoja Air official Masham Zafar told AFP.

"There was no technical issue and bad weather is to be blamed."

She said the plane left Karachi with CAA approval and was given clearance to land at Islamabad.

CAA director general Nadeem Khan Yusufzai said the plane suddenly dropped from 2,900 feet to 2,000 feet as it made its final approach to land, and vanished from the airport radar.

He said another plane from the private Airblue airline landed safely from the same approach about 10 minutes afterwards and there was no indication from the Bhoja pilot that he was in distress.

The flight data recorder has been recovered and will be sent abroad for analysis, he said, and the overall investigation could take up to a year to complete its work.

Distraught relatives wept as they collected the remains of loved ones from Islamabad's main hospital and some voiced anger at what they saw as official fecklessness.

"It's sheer incompetence of the government. This is the second major accident here in less than two years but the president and the prime minister remain unmoved," said a woman who identified herself as Mrs Hassan, whose cousin was killed.

"If the weather was bad why they did not warn the pilot. Why did they allow the plane to land?"

Abdul Raoof blamed the airport control tower for negligence over the crash, which killed his cousin.

"If the weather was bad, the plane should have been turned away," he said. "It is also a mistake of the airline. They sacrificed 127 lives just to save some fuel."

But CAA chief Yusufzai said the weather over the airport was not that severe and the final decision on whether to land or turn back lay with the pilot.

"The captain of the aircraft is the final authority. Nobody questions his decisions whether he wants to go around or to delay or divert flight, that is his discretion," he said.

All 127 people on board -- 121 passengers and six crew -- were killed when the plane crashed and burst into flames at around 6:40 pm on Friday in the village of Hussain Abad. There were 11 children among the dead.

The crash came less than two years after the worst ever air disaster on Pakistani soil.

In July 2010 an Airbus A321 operated by Airblue crashed into the hills overlooking Islamabad while coming in to land in heavy rain and poor visibility, killing all 152 people on board.

Boeing offered "profound condolences" to the victims' families and said it would provide technical assistance to the investigation into the Bhoja crash.

Military and aviation officials said bad weather was probably behind the crash, as there was a hail and thunderstorm over the city at the time.

A senior PIA engineer told AFP he thought an air pocket -- a patch of low air pressure -- could be to blame.

"Visibility was also low because it was raining and there was thunder and lightening. The pilot lost control and apparently failed to lift it out of the air pocket," he said.

Friday's flight was Bhoja's first evening trip from Karachi to Islamabad since resuming operations last month after a 12-year suspension for not paying CAA dues.

The deadliest civilian plane crash involving a Pakistani jet came in 1992 when a PIA flight crashed into a cloud-covered hillside on its approach to Kathmandu, killing 167 people.