Syrian troops killed 28 civilians in the city of Hama on Monday, monitors said, as UN military observers toured protest centres near the capital and both Brussels and Washington imposed new sanctions. 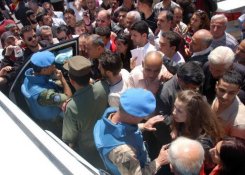 A handout picture released by the Syrian Arab News Agency (SANA) shows tens of Syrians surrounding UN observers during their visit to the central city of Homs. Syrian troops killed 28 civilians in the central city of Hama, monitors said, as UN military observers toured protest centres near the capital and both the European Union and the United States imposed new sanctions.

The persistent bloodshed 11 days into a ceasefire sparked growing criticism from opposition activists of the fledgling UN mission which still numbers just eight observers out of a planned initial deployment of 30.

A UN spokesman said on Monday the mission will be expanded to 300 beginning next week.

Government troops strafed the Arbaeen neighbourhood of the central city of Hama and its environs with light and heavy machineguns, said the Syrian Observatory for Human Rights, reporting the 28 civilian deaths.

The UN observers visited several rebel suburbs near the capital and were met by thousands of protesters demanding the collapse of the regime.

Amateur video posted by activists on YouTube showed four of the unarmed observers in blue helmets walking in Douma, a northern suburb of Damascus, surrounded by a huge crowd waving Syria independence flags.

"The people demand the fall of the regime," some chanted while others called for the arming of the rebel Free Syrian Army.

Monitors also visited the town of Zabadani, 50 kilometres (30 miles) northwest of the capital, where regime forces and rebel fighters have clashed repeatedly in past months.

Activists' videos showed monitors passing by army tanks posted in the streets of Zabadani, despite a call within international envoy Kofi Annan's six-point peace plan for the withdrawal of armour from residential areas.

However, Deputy Foreign Minister Faisal Meqdad, quoted by state news agency SANA, on Monday stressed his government's "total commitment to respecting the Annan plan which the armed terrorist groups... have not yet" accepted.

Arab League chief Nabil al-Arabi on Monday called for the start of a political process to resolve the crisis.

"There's now an international consensus on two points -- a global ceasefire and the start of a political process," Arabi told reporters at a press conference in Algiers.

"A political solution cannot be considered separately from today's goal of achieving a ceasefire," he said.

Two members of the observer advance team on Sunday set up base in the central city of Homs, scene of some of the fiercest fighting between troops and rebels since the outbreak of the 13-month revolt against President Bashar al-Assad.

UN leader Ban Ki-moon has decided that the deployment of 300 ceasefire monitors in Syria can start next week, a UN spokesman told AFP, following a UN Security Council resolution which has authorised the mission.

Activists have been sceptical of the UN mission, saying the regime was simply buying time and was not committed to the ceasefire plan.

Despite a lull in the fighting in regions visited by the observers, the violence has continued unabated in other areas, activists say.

One civilian was killed overnight in Damascus province amid clashes between opposition and government forces, the Observatory said.

Five soldiers were also killed in clashes in Hama province and in Daraa province, south of Damascus, the watchdog added.

The United Nations has estimated that more than 9,000 people have died in Syria since the revolt broke out in March 2011.

In a sign of Western frustration with Damascus, the European Union agreed Monday to slap new sanctions on the regime, banning luxury goods exports and further restricting the sale of items used to repress dissidents.

US President Barack Obama ordered sanctions and visa bans for companies and individuals providing technological know-how, computers or other equipment that helps Syria and its main regional ally Iran oppress their people.

Obama said in an executive order that the two nations had committed serious human rights abuses through network disruption and by using tracking technology and by perpetrating the "malign use of technology."

A Muslim charity, meanwhile, said that around 300 Syrian refugees fleeing to Jordan had escaped a Syrian army ambush near the border but more than 30 of them had been wounded by gunfire.

"The Jordanian army switched off the lights on the border when the shooting started to prevent snipers from killing the refugees," Zayed Hammad, head of the Ketab and Sunna Society, told AFP. One of the wounded had since died.

In Lebanon, another neighbour, the national news agency NNA said two Lebanese and a Syrian national were arrested with a van loaded with arms and rockets headed in the direction of the border with Syria.