Interpol president Khoo Boon Hui said on Tuesday that organised international gangs are behind most internet scams and that cyber crime's estimated cost is more than that of cocaine, heroin and marijuana trafficking put together. 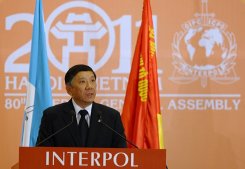 Interpol president Khoo Boon Hui, pictured in 2011, said on Tuesday that organised international gangs are behind most internet scams and that cyber crime's estimated cost is more than that of cocaine, heroin and marijuana trafficking put together.

Speaking to delegates at the opening of the France-based international police agency's European Regional Conference in Tel Aviv, Khoo quoted a study by London's Metropolitan University indicating that "80 percent of crime committed online is now connected to organised gangs operating across borders."

"Criminal gangs now find that transnational and cyber crime are far more rewarding and profitable than other, riskier forms of making money," he said.

"Experts have warned that the cost of cyber crime is larger than the combined costs of cocaine, marijuana and heroin trafficking. In Europe, the cost of cybercrime has apparently reached 750 billion euros ($979 billion) a year," he said.

He also warned of the dangers to global security of cyber attacks, saying that Interpol itself had been hit by the hacker collective Anonymous.

He said that in Israel "a reported number of over 1,000 cyber attacks take place every minute."

Israel has been undergoing a low-level cyber war since January, with purportedly Arab attackers targeting many sites, including those of the Tel Aviv stock exchange, the national airline El Al and the fire brigade.

Hackers also posted the credit cards details of tens of thousands of Israelis.

Israeli hackers have launched some counter attacks, although their government has asked them to show restraint.

Israel is hosting the May 8-10 Interpol European parley for the first time.

Police chief Yohanan Danino said that Israel joined the organisation in 1949, a year after the foundation of the Jewish state, initially as part of the Asia region, where it is geographically located.

But in 2006 it was accepted into the agency's Europe region, reflecting its main international policing concerns.

"Seventy percent of our police activity is connected to European countries ...countries with which we have diverse ties in many fields," he said.

Israel has diplomatic ties with only Egypt and Jordan among its Arab neighbours.

Philippines expects most Thai AstraZeneca shots to arrive after delay