JAKARTA - Police said Tuesday they would not issue a permit for Lady Gaga's planned June 3 concert in Jakarta, after Islamic hardliners vowed not to let the provocative performer set foot in the country.

"We will not issue a permit for the Lady Gaga concert in Jakarta," Saud Usman Nasution, a national police spokesman, told AFP. "The concert will have to be cancelled," he said.

Indonesia's hardline Islamic Defenders Front has mounted protests in Jakarta against Lady Gaga, vowing to intercept the "Poker Face" singer at the airport and ensure she does not enter the world's most populous Muslim-majority nation. 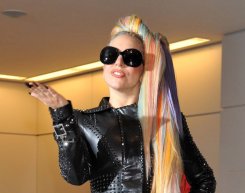 US pop star Lady Gaga arrives at Japan's Narita international airport on May 8. Indonesian police said Tuesday they would not issue a permit for a Lady Gaga concert scheduled for June 3 in Jakarta.

Another national police spokesman said the force had "no problem with Lady Gaga" but could not issue a permit without a letter of recommendation from the Jakarta police, "and they have decided not to do that".

The Jakarta city police said they had received objections to the show by the National Ulema Council, Indonesia's top Islamic body.

"The first thing we've heard from various public leaders is that Lady Gaga doesn't deserve the attention of so many people," said Jakarta police spokesman Rikwanto.

It was not immediately clear whether the organisers will try to obtain a letter of recommendation from police in an alternative location.

Big Daddy Productions, the promoters, have already sold more than 50,000 tickets to the keenly-awaited concert and declined to confirm whether the show, part of Lady Gaga's "Born This Way Ball" tour, had been officially cancelled.

Lady Gaga has faced some opposition on her Asia tour but has not toned down her performances -- at shows in Seoul and Hong Kong she has ridden on to the stage on a mechanical horse, wearing a black bodysuit and an enormous black metal headpiece.

Iranian woman died of 'blow to the head': family in Iraq

Body of missing US ski mountaineer found in Nepal