Poland kicked off its Euro 2012 football festivities on Thursday with the launch of the Warsaw fanzone, less than 24 hours before the whistle blows on the opening match between Greece and Poland. 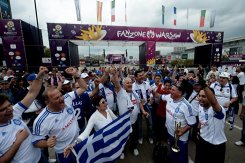 Greek fans shout slogans outside the fanzone of Warsaw. Poland kicked off its Euro 2012 football festivities on Thursday with the launch of the Warsaw fanzone, less than 24 hours before the whistle blows on the opening match between Greece and Poland.

Thousands of Warsaw residents and fans from abroad crammed in to listen to live music and show some football cheer ahead of the 16-nation tournament hosted by Poland and Ukraine in June.

"It's incredible. I think this will be the best period in Poland's history," said Miguel Vegas, 44, a Spaniard living in Poland but rooting for his homeland.

"I'm Spanish till I die, but I hope we play against Poland in the final," he told AFP.

Between 700,000 and one million fans are expected in Poland for the football showcase.

Ticketless supporters will be able to follow the games on a large screen installed in the Warsaw fanzone, which will remain open until 1 a.m. on match days and has space for 100,000 fans.

"We're proud that everything's been so well organised here," said Krzysztof Krzeminski, 38, a Pole who moved to Canada in 1993 but flew back this month for the tournament.

"We play semi-pro soccer in Canada but we came to support Poland," said his friend Michal Wrobel, 37, who designed the "Team Canada" shirts the three were wearing, along with their Polish flags and beer.

Fanzones have also been set up in Poland's three other host cities, which include the Baltic port of Gdansk, Poznan in the west and Wroclaw in the southwest.

Euro 2012 marks the first time the quadrennial football showcase will be held behind the former Iron Curtain and ex-communist Poland has hurried to update its infrastructure and roll out the welcome mat to fans.

A large "Warsaw welcomes you" sign could be seen Thursday draped across the Palace of Culture by the fanzone, one of many Euro 2012 billboards in the capital.

"They're very innovative, colourful, fun," said Hung Lee, 25, an American interning at the Polish Ministry of Health for the summer.

He was at the fanzone Thursday to take photos of the festivities to post to social-networking site Facebook, so that he could share the event with his friends and family.