Japanese researchers have created a functioning human liver from stemcells, a report said Friday, raising hopes for the manufacture of artificial organs for those in need of transplants. 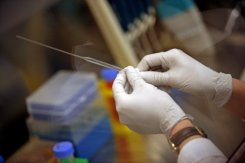 Photo illustration of a scientist working with stem cells. Japanese researchers have created a functioning human liver from stem cells, a report said Friday, raising hopes for the manufacture of artificial organs for those in need of transplants.

A team of scientists transplanted induced pluripotent stem (iPS) cells into the body of a mouse, where it grew into a small, but working, human liver, the Yomiuri Shimbun said.

Stemcells are frequently harvested from embryos, which are then discarded, a practice some people find morally objectionable. But iPS cells -- which have the potential to develop into any body tissue -- can be taken from adults.

A team led by professor Hideki Taniguchi at Yokohama City University developed human iPS cells into "precursor cells", which they then transplanted into a mouse's head to take advantage of increased blood flow.

The cells grew into a human liver 5 millimetres (0.2 inches) in size that was capable of generating human proteins and breaking down drugs, the Yomiuri reported.

The breakthrough opens the door to the artificial creation of human organs, a key battleground for doctors who constantly face a shortage of transplant donors.

Taniguchi's research could be "an important bridge between basic research and clinical application" but faces various challenges before it can be put into medical practice, the Yomiuri said.

An abstract of Taniguchi's research was delivered to regenerative medicine researchers ahead of an academic conference next week, but Taniguchi declined to comment to AFP before the meeting.

Two separate teams, one from the United States and one from Japan, discovered iPS cells in 2006.

From oil to renewables, winds of change blow on Scottish islands

'Running out of time': Asia struggles to kick coal addiction