Hebrew graffiti thanking Hitler for the Holocaust and denouncing Zionism was sprayed at Jerusalem's Yad Vashem Holocaust museum on Monday, with suspicion falling on ultra-Orthodox opponents of the state of Israel. 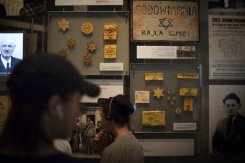 "Thank you Hitler for your wonderful Holocaust that you arranged for us, it's only because of you that we got a state at the UN," read one of 10 slogans daubed on walls at the museum, sparking shock in the Jewish state which came into being just three years after the end of World War II.

The graffiti was denounced as "a callous expression of burning hatred" by Yad Vashem Director Avner Shalev, who pointed the finger at ultra-Orthodox extremists who are adamantly opposed to the existence of the modern state of Israel.

Several slogans were sprayed on the red-brick Wall of Remembrance in Warsaw Ghetto Square, one of which read: "The Zionist leadership wanted the Holocaust," while the other said: "If Hitler hadn't existed, the Zionists would have invented him."

More graffiti was found on walls near the cattle car memorial, which remembers how millions of Jews were transported from all over Europe to the Nazi death camps.

"This unprecedented act crosses a red line," Shalev said in a statement issued by Yad Vashem, which said 10 pieces of "scathing graffiti" had been found at the site.

"The particularly disturbing slurs included poisonous attacks on Zionism. The main motif was that Zionism caused the Holocaust," the statement said.

"We are shocked and dazed by this callous expression of burning hatred against the Zionists and Zionism," Shalev added.

Speaking to Israel's army radio, Shalev said the text pointed to the involvement of ultra-Orthodox extremists.

"One of the slogans was signed with the words 'World Haredi Jewry,'" he said, using the Hebrew word for ultra-Orthodox Jews, indicating that police were checking CCTV footage from cameras positioned around the site.

Fuelling suspicion of ultra-Orthodox involvement, another slogan read: "The war of the Zionist regime is not the war of the Jewish people."

The red, white and black graffiti was written both in formal Hebrew characters and in handwriting, and signed "The global cynical mafia."

There are several ultra-Orthodox groups that do not believe that a Jewish state should exist without the appearance of the Messiah, the best-known of which is Neturei Karta, whose several hundred members live in Mea Shearim, a crowded ultra-Orthodox neighbourhood of Jerusalem.

Police spokesman Micky Rosenfeld said that an investigation had been opened but that it was not immediately clear who was behind it.

Education Minister Gideon Saar condemned the vandalism and expressed confidence the police would catch the perpetrators.

"Whoever desecrated and soiled Yad Vashem with these disturbed slogans did it with the aim of harming public sensibilities," he said in a statement.

A push for a new draft law governing the e-sports sector with an aim to protect children from violent games has caused panic throughout the industry.