OPEC announced Thursday it was keeping its oil output ceiling unchanged but vowed to eliminate overproduction as it sought to halt falling oil prices amid a weak global economy and eurozone debt crisis. 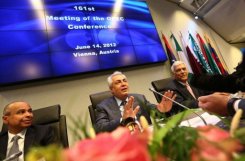 Iraq's Minister of Oil and President of the Organization of the Petroleum Exporting Countries (OPEC) conference, Abdul-Kareem Luaibi Bahedh (2ndR) and OPEC Secretary General Abdalla Salem El-Badri (R) attend a press conference at the end of the 161st meeting of the OPEC in Vienna. OPEC announced Thursday it would keep its oil output ceiling unchanged.

"Member countries should adhere to the production ceiling of 30 mbpd (million barrels per day)," agreed in December, the cartel said in a statement read out at a press conference following the meeting.

"They know they are producing 31.6 mbpd and they have been asked to reduce the 1.6," Abdullah El-Badri, the secretary-general of the Organization of Petroleum Exporting Countries (OPEC), added.

"The countries that are participating in 1.6 (mbpd), we will not mention them, they will come back to 30 mbpd. They agree. This is a collective decision," he said.

Kingpin Saudi Arabia recently ramped up production amid divisions between OPEC members, who together pump one third of the world's oil, over how to respond to plunging prices and uncertainties over global energy demand.

"The market is very well supplied. That's why we made this decision."

In its statement, OPEC noted that: "Downside risks facing the global economy... continue to mount."

"Ongoing challenges to world economic recovery, coupled with the presence of ample supply of crude in the market, have led to the marked and steady fall in oil prices," it added.

The price of Brent crude oil has tumbled from $128 a barrel in early March to $96, mainly on expectations of weaker demand caused by the euro's troubles and a slowing Chinese economy.

"We discussed intensively the situation of the market, the economic situation in the eurozone, the overproduction in the market, and the most important thing is that we decided to maintain the ceiling of OPEC production," Venezuelan Energy Minister Rafael Ramirez told journalists as he left.

Before the meeting, several members had complained of an excess supply on the market, with hawks Venezuela and Iran calling for production cuts to boost oil prices.

In the first quarter, Saudi output jumped 250,000 barrels per day to 9.9 mbpd from a year earlier, according to OPEC estimates, in anticipation of sanctions on Iran, the cartel's second biggest oil producer.

An EU oil embargo due to come into force on July 1 was already strongly criticised by El-Badri and Venezuela this week.

Meanwhile, OPEC members were keeping a firm eye on developments in the eurozone, which have weighed heavily on oil prices.

"We're all waiting avidly to see what happens out of Greece this weekend," Nigerian Petroleum Minister Diezani Allison-Madueke told journalists ahead of Greek elections on Sunday.

On Thursday, most OPEC ministers agreed they favoured an average price of at least $100 per barrel although Iran pushed for "between $100 and $120."

"It is very difficult to protect price levels. We are looking for a reasonable price not an extremely high or an extremely low price," El-Badri said afterwards.

Saudi Arabian Oil Minister Ali al-Naimi noted he was "happy" as he exited the OPEC headquarters in Vienna on Thursday, without elaborating further.

OPEC's next ministerial reunion will be held in Vienna on December 12, the cartel said.

The election of a new secretary-general to replace El-Badri, whose mandate expires at the end of the year, was delayed until then.

"We have four candidates, very good ones... and we will decide in our next meeting," said Ramirez.

"I think the final decision will be taken in December," the outgoing OPEC head agreed.

So far, four candidates for the position have emerged, from Ecuador, Iran, Iraq and Saudi Arabia, with an extension of El-Badri's mandate also a possibility if cartel members cannot reach a unanimous decision.