Up to 27 million people living in slavery: US
World

Up to 27 million people living in slavery: US

Up to 27 million people are living in slavery around the world, US Secretary of State Hillary Clinton estimated as the US unveiled its annual report into human trafficking. 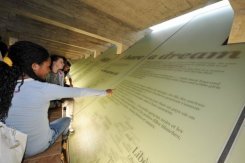 File picture shows visitors to the Abolition of Slavery Memorial Museum in Nantes, which was France?s largest slave port. Up to 27 million people are living in slavery around the world, US Secretary of State Hillary Clinton estimated as the US unveiled Tuesday its annual report into human trafficking.

But the report showed that as governments become more aware of the issue, instigating tough new laws and programs to help victims, progress is being made in wiping out what it called the "scourge of trafficking."

"The end of legal slavery in the United States and in other countries around the world has not, unfortunately, meant the end of slavery," said Clinton.

"Today it is estimated as many as 27 million people around the world are victims of modern slavery, what we sometimes call trafficking in persons," she said at the unveiling of the report at the State Department.

"Those victims of modern slavery are women and men, girls and boys, and their stories remind us of the kind of inhumane treatment we are capable of as human beings," said Clinton.

"Whatever their background, they are the living, breathing reminders that the work to eradicate slavery remains unfinished."

As America prepares to mark the 150th anniversary of the proclamation of the emancipation of US slaves, people must reflect on "how much further we have to go to free all these 27 million victims," Clinton added.

Out of the 185 countries included in the 2012 report, only 33 complied fully with laws in place to end human trafficking, putting them at the top of a four-tier ranking system.

But five countries had moved up from the bottom blacklist known as tier 3, including Myanmar and Venezuela, to be included among the 42 countries now on what is known as a tier 2 watchlist.

Myanmar was removed from the blacklist because the government "took a number of unprecedented steps to address forced labor and the conscription of child soldiers; these steps amount to a credible commitment to undertake anti-trafficking reforms over the coming year," the report said.

Syria however fell onto the blacklist for the first time, in a move which could cut off any US aid and make it harder to get US backing for funds from organizations like the World Bank and the International Monetary Fund.

"The government of Syria does not fully comply with the minimum standards for the elimination of trafficking and is not making significant efforts to do so," the 2012 Trafficking in Persons report said.

Among the 16 other countries on the blacklist were Algeria, the Democratic Republic of the Congo, Libya, North Korea and Saudi Arabia.

Kenya slipped down onto the watchlist for the first time in five years, while Nigeria lost its place on tier 1, moving down a notch as the report highlighted that women and children were forced into labor and sex trafficking.

But Clinton hailed the fact that a total of 29 countries had been upgraded to a higher ranking, "which means that their governments are taking the right steps."

They included Bangladesh, which was bumped up to tier two for making significant efforts to comply with minimum standards, including passing "a comprehensive anti-trafficking law" in December.

Ambassador Luis CdeBaca, director of the office to combat trafficking in persons, said while the number of people officially identified as victims of trafficking and slavery had gone up by 28 percent since last year to 42,291, the numbers of prosecutions in 2012 had also increased by 10 percent to 3,969.

So while countries "still have a little ways to go" there was "the beginnings, I think, of a real trend," he said.

This year's report focuses on how to better protect the victims, and urges governments to meet the challenge head-on.

"Traffickers are criminals. Governments -- which alone have the power to punish criminals and provide legal recourse to survivors -- cannot waver in their efforts to confront modern slavery," the report says.

But it also argues that human trafficking takes many guises and it is not just about moving people across borders to trap them in prostitution.

"The United States government, and increasingly, the international community, view 'trafficking in persons' as the term through which all forms of modern slavery are criminalized," it says.