Anders Behring Breivik, who killed 77 people in Norway last July, should be locked up in a psychiatric ward instead of prison, the prosecution said Thursday, arguing his sanity had not been proven beyond a reasonable doubt. 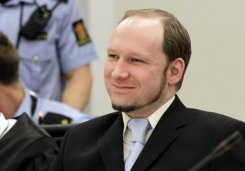 Mass killer Anders Behring Breivik smiles during his trial in room 250 of Oslo's central court on Thursday. Breivik, who killed 77 people in Norway last July, should be locked up in a psychiatric ward instead of prison, the prosecution said Thursday, arguing his sanity had not been proven beyond a reasonable doubt.

"Our request is that he be obliged to undergo psychiatric treatment" in a closed unit, prosecutor Svein Holden said, wrapping up the prosecution's three-hour closing arguments on the next-to-last day of the trial.

He added though that if the Oslo district court's five judges instead opted to find Breivik criminally sane, they should sentence him to Norway's harshest penalty: 21 years in prison, but with the possibility to extend the sentence for as long as he is considered a danger to society.

In defiance of Holden, the 33-year-old rightwing extremist stood up and touched a clenched right fist to his chest before stretching his arm out in a nationalist salute he had made on the first days of his trial in April but had stopped doing at the request of his lawyers.

Breivik is intent on being found sane to ensure his Islamophobic ideology is not written off as a crazy rant.

The five judges are expected to announce their verdict on either July 20 or August 24.

"We are not convinced or sure that Breivik is criminally insane, but we are in doubt," Holden said.

Psychiatric evaluations of Breivik's mental health have sharply contradicted each other.

But Holden and his colleague Inga Bejer Engh followed the line presented by a first court-ordered assessment, which found Breivik to be suffering from paranoid schizophrenia.

While that diagnosis has been widely criticised for, among other things, describing extreme political ideas as delusions, Holden said it was enough to cast doubt on Breivik's sanity.

He pointed for instance to the confessed killer's stubborn claims about a militant nationalist network, the Knights Templar, despite "overwhelming evidence" that it did not exist, as a possible example of a delusion.

Bejer Engh meanwhile told reporters after the proceedings that there was little reason to fear Breivik would be quickly set free if sentenced to a closed psychiatric ward instead of prison.

"There has been a lot of speculation during this case that being sentenced to psychiatric treatment would mean he could get out tomorrow," she said.

However, she insisted: "We do not live in such a world."

"It is obvious that there are criminals who have been sentenced to psychiatric treatment and who get out relatively quickly, but there are also killers sentenced to a closed care unit and who probably will never get out," she said.

Earlier Thursday, Bejer Engh told the court that the day of the massacre, "July 22, 2011 was and is still a national trauma. Thousands of people were directly or indirectly affected."

She cautioned that many of the most pressing questions in the case, including how "a citizen became a murder machine", probably would not be sufficiently answered to satisfy those affected.

On July 22, Breivik first set off a car bomb outside government buildings in Oslo, killing eight people, before travelling to Utoeya island, northwest of the capital, where he spent more than an hour methodically shooting and killing another 69 people, mostly teenagers.

The victims had been attending a summer camp hosted by the governing Labour Party's youth organisation.

Breivik, who has been charged with "acts of terror", has told the court what he did was "cruel but necessary" to protect Norway from a wave of multiculturalism and a "Muslim invasion".

A majority of psychiatric experts who have observed Breivik in detention and in court have agreed he is not suffering from a psychosis, but rather some form of personality disorder -- which would mean he could be sentenced to prison.

An opinion poll published Thursday indicated 74 percent of Norwegians want Breivik to be sent to prison, while only 10 percent think he should be sent to an insane asylum.

Breivik himself has said court-ordered psychiatric confinement would be "a fate worse than death."

The trial, which opened on April 16, concludes on Friday with the defence lawyers' closing arguments. They are expected to call for Breivik to be acquitted, since, despite his confession, he has pleaded not guilty.

Alternatively, they will ask that he be found sane and sent to prison.