Mongolia was facing political gridlock on Saturday with the ruling party leading calls for fresh elections and rejecting a new voting system that was intended to bring more fairness to the polls. 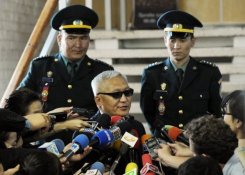 A candidate (C) is watched by security while being interviewed about the Mongolian parliamentary elections at the electoral commission in Ulan Bator, on June 29. Mongolians voted to elect a new parliament tasked with distributing the spoils of a mining boom that has brought rapid growth but also rising inequality in the resource-rich nation.

An electronic voting system was used for the first time in parliamentary elections on Thursday in an effort to avoid a repeat of the chaos of a manual count four years ago when corruption allegations triggered deadly riots.

However the automated system has been plagued with technical problems, and results of the elections that were intended to be released within hours of polls closing are still yet to be announced.

The ruling Mongolian People's Party (MPP) and eight smaller parties signed a petition on Friday that said the new electronic voting system had "violated the constitution of Mongolia".

"We are demanding the traditional system of counting votes by hand in every election constituency across the whole country to end this confusion that the population has about the voting machines and automated systems," MPP secretary Yangug Sodbaatar said.

However the Democratic Party, the main opposition group which believes it will eventually win Thursday's vote, did not sign the petition and is backing the automated system.

In 2008, accusations of vote rigging among the major parties led to riots in which four people died.

The MPP and the Democratic Party eventually formed an uneasy coalition in an effort to heal the wounds and ensure political stability in the resource-rich nation, which is in the midst of a stunning mining boom.

The economy grew 17.3 percent last year because of the boom, which has seen some of the world's biggest mining firms move into the country to exploit copper, coal and gold reserves estimated to be worth more than $1 trillion.

The Democratic Party quit the coalition in January to prepare for the elections, and the automated system was intended to be an important next step in the former Soviet-ruled country's transition to a stable democratic state.

The Mongolian Election Commission had no immediate response to the calls for a fresh vote using the old, manual system.

But it said it had held a manual recount in some polling stations on Friday and the results had largely matched the automated tally.

The technical problems have included being unable to transmit results from far-flung polling stations in Mongolia, which is three times the size of France but has just 2.8 million people.