A scandal linking Malaysia's leader, a young woman's murder and alleged kickbacks in a French submarine deal has resurfaced as a potential danger for the government as elections loom. 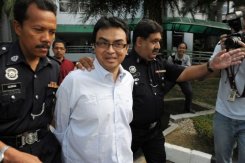 Abdul Razak Baginda (C), a high-profile political analyst, walks towards the court room in police custody in Shah Alam, west of Kuala Lumpur, in 2008. A scandal linking Malaysia's leader, a young woman's murder and alleged kickbacks in a French submarine deal has resurfaced as a potential danger for the government as elections loom.

Even by the corruption-prone standards of Malaysia's long-ruling coalition, which since 2009 has been headed by Prime Minister Najib Razak, the Scorpene case is explosive.

It centres on allegations that French submarine maker DCNS paid commission of more than 114 million euros ($142 million) to a purported shell company linked to Abdul Razak Baginda, a former close associate of Najib.

Abdul Razak's Mongolian mistress, who was said to have demanded a payoff for working as a language translator in the deal, was shot dead and her body blown up with plastic explosives near the capital in 2006.

But the extraordinary affair sank off the radar in 2008 when a Malaysian court cleared Abdul Razak of abetting the murder, sparking an outcry and opposition allegations of a huge cover-up.

Calls for further investigation were not pursued at the time.

Now, though, the affair is back in the headlines with a vengeance after French judges, acting on a complaint by opposition-leaning Malaysian rights group Suaram, launched a new probe in April.

Since then Malaysia's online media has been aflutter with talk of new "evidence" that Suaram and its lawyers say has been turned up by the judges.

They include an allegation that a classified Malaysian defence ministry report on the country's naval needs was sold to French defence giant Thales, which part-owns DCNS, possibly to help land the contract, according to Suaram's lawyer Joseph Breham.

Najib was defence minister in 2002 when the Scorpenes were ordered.

Breham has told AFP that as parties to the case, Suaram are allowed to view evidence in the ongoing investigation and quote from it, but not distribute hard copies. AFP is not able to verify the claims.

"We are quite overwhelmed at the developments in the case," said Suaram official Cynthia Gabriel. "If the French investigation had not opened, we would never have known about these things."

On Monday, news portal Asia Sentinel published 133 documents, which it said were obtained from the French inquiry and showed the deal "has resulted in a long tangle of blackmail, bribery, influence peddling, misuse of corporate assets and concealment, among other allegations".

AFP has no way of verifying the authenticity of the documents.

A DCNS spokesman said the company could not comment on the case, citing the ongoing judicial investigation.

The defence minister told parliament the deal was done through "direct negotiations in accordance with procurement procedures", without any commission being paid.

Najib himself has not commented publicly on Suaram's latest claims but has previously denied any link to the graft allegations, rejecting them in 2008 as a politically-motivated smear by the opposition.

Malaysian authorities have long refused calls for a wide-ranging inquiry.

Nurul Izzah Anwar, who is the daughter of opposition leader Anwar Ibrahim and who raised the issue in parliament, told AFP: "This concerns national security and is very serious.

"At the very least, Najib must explain to the electorate what happened."

The prime minister must call fresh elections by early next year, and will be seeking to reverse strong opposition gains in parliament at the last polls in 2008.

But he already faces corruption cases involving top officials, slowing economic growth, and questions over his pledges of change after police clashed with protesters at a rally for election reform attended by tens of thousands.

"The case has new legs now. At minimum, it could embarrass Najib if it points to involvement by those close to him, and of course worse if we see direct involvement by Najib," he said.

Also looming is a late August court appeal by the two police officers convicted and sentenced to hang for the murder of Abdul Razak's mistress, Altantuya Shaariibuu.

Both of them are former police bodyguards of Najib and one, Sirul Azhar Umar, has previously said he was a scapegoat for higher-level culprits.

The French inquiry is likely to take years, and focus more on French politicians and business people than Malaysian officials.

But Breham told AFP that other new evidence seen by the plaintiffs points to a previously unknown company in Hong Kong called Terasasi receiving 36 million euros ($45 million) from Thales.

Records indicate Abdul Razak was listed as heading the company, said Breham, citing information he said was provided by the judges.