The Catholic Church could have avoided much of the scandal that currently surrounds it if women had been in positions of power, says a feminist insider in the Church. 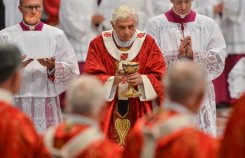 Pope Benedict XVI holds a mass at Saint Peter's Basilica June 29, in the Vatican. The Catholic Church could have avoided much of the scandal that currently surrounds it if women had been in positions of power, says a feminist insider in the Church.

Journalist and historian Lucetta Scaraffia is the founder of a new women's supplement for the Vatican's official newspaper and a campaigner for women's rights in the male-dominated institution.

The scandals that have engulfed the Vatican would not have happened if women had been in charge, she argues.

In the wake of a series of clerical sex abuse affairs that have swept through the Church, she has pushed for women to teach in seminaries to give future priests the social and cultural skills to help them handle celibacy.

"The paedophilia scandal was almost exclusively male," she told AFP, at her book-lined apartment in the Parioli quarter of Rome.

"If there had been women in positions of power they would not have allowed those things to happen.

"Women have long been reputed as sexually dangerous. But it's clear that the danger lay with men and children," she said.

Scaraffia says the new insert she edits in the 150-year-old Vatican newspaper, the Osservatore Romano, has ruffled feathers, despite having the support of Pope Benedict XVI.

"There are those who say 'I have not read it'," said the 64-year-old journalist.

"They don't want to say it's not good. they prefer to say 'it doesn't interest me.' The indifference is terrible."

But, she added: "It was the pope who decided to have women work at the Osservatore Romano."

The Osservatore Romano newspaper, founded in 1861, only opened its doors to female journalists in 2008.

But despite the pope's backing for what has been described by the Osservatore Romano as a move "to give voice to the value that women bring to the Church," Scaraffia said she was fighting a lonely battle.

"There is misogyny in the Church," she said.

"It's a closed world, caught up with issues of power. Many in the clergy are afraid that if women come onto the scene there will be less room for them."

Her comments come as the Vatican watchdog struggles to bring radical nuns in the United States back into line.

In May, the Vatican released a report accusing the Leadership Conference of Women Religious (LCWR), which represents most US nuns, of "radical feminism" and not focusing enough on fighting gay marriage and abortion.

But pockets of rebellious clergy across the world have also called for women to be allowed to play a more prominent role in the Church.

"It's not possible to go on like this," said Scaraffia. "Women in the Church are angry!"

The "Vatileaks" affair currently rocking the Holy See was another crisis that could have been avoided if women had occupied leading roles inside the institution, Scaraffia said.

In this affair, secret papal documents have been leaked to the media in what many observers have described as a power struggle between rival factions inside the Vatican.

"If there were women with authority in the Church, nothing would be leaked," she said. "Women are freer because they do not have such thoughts of power."

Scaraffia became an ardent feminist when she lost her faith in the 1960s, only to return to the Church 20 years ago.

But while she may be a feminist, her stance on key Church issues is staunchly Catholic: she opposes abortion and defends the celibacy of the priesthood.

Some religious observers believe the support she receives from the pontiff and her new-found influence as editor of the women's supplement may help give the issues surrounding female roles in the Church extra prominence.

Scaraffia also believes the aged Benedict is changing attitudes to scandal within the Church by tackling the Holy See's long-standing policy of secrecy.

The pope "is very alone and has a very difficult papacy because all the problems which were hidden have now come to light... problems which took root in the Church 30 or 50 years ago," she said.

Benedict was accused of being too slow to react to the sex abuse scandal, but he has launched an inquiry to get to the bottom of the leaks scandal.

"He has the courage to see things as they are," she said.

"We have always covered scandals up, he lets them come to light. Many people believe it is better to hide things. He says the Church is not protected by silence," she added.

"He thinks that, for purification, there needs to be shame."