Kofi Annan warned on Tuesday that Syria's deadly conflict could spread across the region as he held talks in Iran and Iraq aimed at shoring up support for his tattered peace plan. 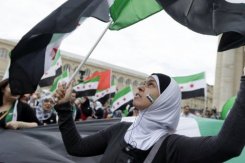 But in an implicit rebuff to Annan's out reach to Iran, the United States insisted anew on Tuesday that it sees no role for Tehran in resolving the conflict.

A day after meeting President Bashar al-Assad in Damascus, the UN-Arab League peace envoy had talks in Tehran and Baghdad amid new bloodshed in Syria, where more than 17,000 people have reportedly been killed since March 2011.

In Tehran, he stressed that the Islamic republic, Assad's staunchest ally, has a key role to play, and also sought help from Iraq, another neighbour of Syria.

"There is a risk that the situation in Syria gets out of hand and spreads to the region," Annan told a news conference with Salehi, who hailed the envoy's "neutrality" and reiterated Iranian support for his mission.

But White House spokesman Jay Carney said the conflict will not be resolved until Tehran's ally Assad steps down and allows a negotiated political transition.

"I don't think anybody with a straight face could argue that Iran has had a positive impact on developments in Syria," Carney told reporters aboard Air Force One.

Annan also made a brief trip to Baghdad on Tuesday and said after talks with Prime Minister Nuri al-Maliki that he would brief the UN Security Council on Wednesday.

The former UN chief's Middle East trip follows a meeting of world powers in Geneva late last month, to which Iran was not invited, to salvage his peace initiative.

A plan was agreed in Geneva for a political transition in Syria, which did not make an explicit call for Assad to quit, but the West and the opposition made clear they saw no role for him in a unity government.

After meeting Assad on Monday, the former UN chief said he had agreed with him on a new political approach to ending the crisis in Syria that he would put to the rebels.

"We discussed the need to end the violence and ways and means of doing so. We agreed an approach which I will share with the armed opposition," he said.

Speaking of Assad, Carney said "we remain highly sceptical about (his) willingness to keep his commitments, which is another reason why Syria's future cannot plausibly have Bashar al-Assad in the government."

"He's long since lost his credibility," he insisted.

The army rained shells down on the rebel-held central town of Rastan as violence killed at least 58 people nationwide, the Syrian Observatory for Human Rights said.

Syrian Arab Red Crescent staffer Khaled Khaffaji was among those killed, prompting the head of the organisation, Abdul Rahman al-Attar, to urge respect for humanitarian workers.

Russia said on Tuesday that it wanted to host a new meeting of foreign powers on the Syria crisis but stressed that the talks should not decide Assad's fate.

Deputy Foreign Minister Mikhail Bogdanov also said the attempt in Geneva to save Annan's peace plan needed to be continued with the involvement of countries such as Iran, which both Washington and European powers strongly oppose.

But the opposition Syrian National Council said its priority was to "work for the fall of the Assad regime and all its symbols," insisting there could be no political transition until the embattled president's departure.

The new SNC leader, Abdel Basset Sayda, is due in Moscow on Wednesday at the foreign ministry's invitation, the SNC said.

Annan admitted in remarks published by French newspaper Le Monde ahead of his Damascus trip that his peace blueprint has so far foundered.

He has previously expressed frustration that while Moscow and Iran are mentioned by some as stumbling blocks to peace, "little is said about other countries which send arms, money and have a presence on the ground."

Russia is sending a flotilla of six warships to its naval base at Syria's port of Tartus, the Interfax news agency reported on Tuesday, citing a military source.

The source said the flotilla's deployment would last until the end of September and "was not linked to the escalation of the situation in Syria."

The White House said it was aware of the flotilla's movement but does not see cause for concern.

"We currently have no reason to believe this move is anything out of the ordinary but we refer you to the Russian government for more details," Erin Pelton, a spokeswoman for the National Security Council, told AFP.

Moscow arms export officials said on Monday that Russia will not supply new weapons to Syria while fighting there continues, while stressing that old contracts would be fulfilled.

That drew criticism from Amnesty International, whose deputy director for the Middle East and North Africa said "they must immediately stop all arms transfers, including technical assistance, to the Syrian government."

Lebanon, meanwhile, began reinforcing its border with Syria following a series of deadly attacks, a military spokesman said in Beirut.