Tens of thousands of Spaniards joined coal miners who marched with their helmet lamps shining in the dark Wednesday in a protest at industry subsidy cuts that they say threaten their communities. 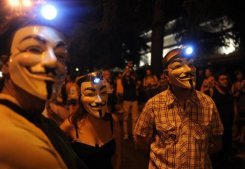 Sympathizers welcome Spanish coal miners during a march through Madrid on July 10. Tens of thousands of Spaniards joined coal miners who marched with their helmet lamps shining in the dark Wednesday in a protest at industry subsidy cuts that they say threaten their communities.

Some 400 miners in white hard hats and blue overalls were joined by a multitude of ordinary citizens, also angered by the economic cuts the government has made in response to the financial and economic crisis.

"Miners, stick it out, Spain is rising up!" they chanted, to the sound of drums and the boom of high-powered fireworks as the miners edged along the broad avenues, swamped by the crowd of sympathisers.

Weeks of protests by miners in the north have boiled over into violent clashes with police, but the march dispersed peacefully early Wednesday after meeting more crowds on the central Puerta del Sol square in the middle of the night.

"We are all miners," read one banner hoisted as the miners' cortege weaved through the crowd amid deafening cheers.

"We didn't expect such a big welcome, much less," said Roberto Quintas, 50, a miner of 22 years, who along with hundreds of others had hiked hundreds of miles from the north in protest.

"The fact people are coming into the street and mobilising is a good sign," added Quintas, tired after marching from the far northern town of Villablino near Leon.

The miners planned a second Madrid demonstration later on Wednesday morning, which unions hoped would draw at least 25,000 people.

They are protesting the government's decision to slash coal industry subsidies this year to 111 million euros ($142 million) from 301 million euros last year, which they say threatens 30,000 jobs directly and indirectly.

Unions say the cuts will destroy coal mining, which relies on state aid to compete with cheaper imports.

"The fight is for something just, we are just coming to claim what is ours," said Manuel Cinoceda, a 55-year-old miner from the Aragon region who took early retirement, as his group entered Madrid on Tuesday.

The entry into Madrid after a two-week journey on foot of more than 400 kilometres (250 miles) was hailed by car drivers beeping their horns and some fire engines sounding their sirens.

"Except for a few towns, we have been very warmly welcomed almost everywhere," said Antonio Risco, 52, who joined the Aragon marchers after leaving the Cordoban mining region of Guadiato de Penarroya.

"We have to make this government realise that the mining regions have to survive and coal, too, because it is a native energy, which comes from the country and is cheap," said Risco, who retired after 22 years' work.

Spanish coal's state subsidies are due to be eliminated by 2018 under European Union agreements.

Spain's mines have been gradually closing over the past 20 years. Only around 40 are still active, mostly in the north, and they employ about 8,000 miners as well as sustaining other jobs indirectly.

Many towns rely on them, said Francisco Martin, a 35-year-old miner from the northern town of Arino.

"If they close this, there is nothing. They have had many years to re-industrialise but they have done nothing. If they close the mine, they throw us out and where are we going to go?"

Their protests in the north, with miners firing rockets and police responding with rubber bullets, have been the most volatile in months of demonstrations in various sectors across Spain against the cuts

Under pressure from financial markets and its European neighbours to stabilise Spain's public finances, the conservative government has announced deep spending cuts.

Prime Minister Mariano Rajoy was expected to announce more such measures in an address to parliament scheduled on Wednesday morning.