Myanmar's president told the UN Thursday that refugee camps or deportation was the "solution" for nearly a million Rohingya Muslims in the wake of communal unrest in the west of the country. 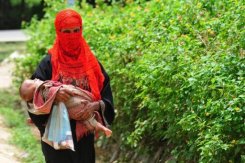 A Rohingya Muslim woman walks with her child at an unregistered refugee camp in Teknaf, Bangladesh in June 2012. Myanmar's president Thursday told the UN that refugee camps or deportation was the "solution" for nearly a million Rohingya Muslims in the wake of communal unrest in the west of the country.

Thein Sein, who had previously struck a more conciliatory tone during fighting that left at least 80 people dead in Rakhine State last month, told the chief of the United Nations refugee agency the Rohingya were not welcome.

"We will take responsibility for our ethnic people but it is impossible to accept the illegally entered Rohingyas, who are not our ethnicity," he told UN High Commissioner for Refugees Antonio Guterres, according to the president's official website.

The former junta general said the "only solution" was to send the Rohingyas -- which number around 800,000 in Myanmar and are considered to be some of the world's most persecuted minorities -- to refugee camps run by UNHCR.

"We will send them away if any third country would accept them," he added. "This is what we are thinking is the solution to the issue."

Communal violence between ethnic Buddhist Rakhine and local Muslims, including the Rohingya, swept the state in June, forcing tens of thousands to flee as homes were torched and communities ripped apart.

Decades of discrimination have left the Rohingya stateless, with Myanmar implementing restrictions on their movement and withholding land rights, education and public services, the UN says.

Unwanted in Myanmar and Bangladesh -- where an estimated 300,000 live -- Rohingya migrants have undertaken dangerous voyages by boat towards Malaysia or Thailand in recent years.

According to the UNHCR around one million Rohingya are now thought to live outside Myanmar, but they have not been welcomed by a third country.

Bangladesh has turned back Rohingya boats arriving on its shores since the outbreak of the unrest.

"Basically Myanmar does not consider these 735,000 Muslims in northern Rakhine state to be their citizens and we think the solution is for them to get citizenship in Myanmar," UNHCR's Asia spokeswoman Kitty McKinsey told AFP.

"So we would not be very likely to assist in transporting them out of the country and housing them somewhere else. As a refugee agency we do not usually participate in creating refugees."

McKinsey said the UN had been working for "several decades" in the area, trying to promote reconciliation and "benefit all communities, not just the Muslims".

Ten aid organisation staff, including some from the UN, were detained in Rakhine in the wake of the unrest, according to a situation bulletin by the UN Office for the Coordination of Humanitarian Affairs (OCHA) last week.

Three people -- two from the UN and another international aid worker -- are thought to have appeared in court on June 9.

"They have been charged and appeared in court but they have not been tried," an unnamed aid worker told AFP.

Although security forces have quelled the worst of the unrest, tens of thousands of people remain in government-run relief camps with the UN's World Food Programme reporting that it has provided aid to some 100,000 people.

Both sides have accused each other of violent attacks, which were sparked following the rape and murder of a local Buddhist woman and subsequent revenge attack by a mob of ethnic Rakhines that left 10 Muslims dead on June 3.

A state of emergency is still in force in several areas.

The Fiscal Policy Office (FPO) has downgraded Thailand's economic outlook to 2.8% this year and 2.5% last year after taking into account the impact of the deadly virus epidemic and the further delay in the annual budget bill for fiscal 2020.

Cabinet approval will be sought to spend 178 million baht from the central fund to help ease overcrowding at 93 prisons across the country, Corrections Department chief Narat Sawetnan said on Wednesday.