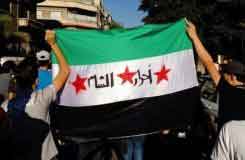 Thousands of Syrians from Mareh, a city in the northern countryside of Syria, protest against the massacre in Treimsa.

Activists said about 150 people were killed in what the Syrian opposition charged was a massacre by regime forces on Thursday but which the government claimed was a clash with rebels.

Ban demanded that the UN Security Council act on the 16-month-old conflict, warning that any failure would be giving "a license for further massacres".

Ban and Annan, the UN-Arab League envoy, expressed outrage at the killings and to make an "urgent call" for increased pressure on President Bashar al-Assad, whose regime launched a brutal crackdown on dissent in March 2011.

"I call upon all member States to take collective and decisive action to immediately and fully stop the tragedy unfolding in Syria. Inaction becomes a license for further massacres," Ban said in a hard-hitting statement aimed at the council.

The massacre in Treimsa has added new urgency to deadlocked Security Council negotiations on a Syria resolution. Russia has rejected western demands for non-military sanctions to be threatened to back Annan's peace efforts.

Washington has called for a ceasefire to let UN Supervision Mission in Syria (UNSMIS) observers into Treimsa in the central province of Hama.

"The use of artillery, tanks and helicopters, which has been confirmed by UNSMIS, is a violation of the Syrian government's obligations and commitment to cease the use of heavy weapons in population centres," Annan said in a letter to the 15-nation council obtained by AFP.

"Tragically, we now have another grim reminder that the council's resolutions continue to be flouted."

He again called on the council, which is debating rival draft resolutions on Syria, to "send a message to all that there will be consequences for non-compliance".

Western nations have proposed a resolution that would impose sanctions on Assad for not ending the use of heavy weapons in the conflict, which rights activists say has left more than 17,000 people dead.

But Russia has rejected any use of sanctions.

"I condemn this outrageous escalation of violence in the strongest possible terms, and fully concur with the views expressed by the joint special envoy," Ban said in a note to the council with Annan's letter.

French President Francois Hollande called on Russia and China not to oppose UN sanctions against Syria following the latest massacre, saying it would "only result in chaos and war in Syria at the expense of (your) own interests."

In Brussels, EU foreign policy chief Catherine Ashton, putting the death toll in Treimsa at 200, denounced the killings as "an atrocity" and "a blatant violation" of Annan's six-point peace plan, which has not been observed.

Rebel leader Abu Mohamad, whose fighters are based near the village, said more than 200 people were slaughtered.

The Observatory was more cautious, saying "several dozen rebel fighters were among those killed," adding that only around 40 of the dead had been identified, while 30 were burned and 18 were "summarily executed".

Observatory head Rami Abdel Rahman told AFP it "might be the biggest massacre committed in Syria since the start of the revolution."

A spokesman for Syria's military said the army killed "many terrorists" in Treimsa, but no civilians, in a "special operation... targeting armed terrorist groups and their leadership hide-outs."

Treimsa, which had a population of 7,000, "is empty now. Everyone is dead or has run away," an activist calling himself Abu Ghazi said.

Treimsa is near Al-Kubeir, where at least 55 people were killed on July 6, according to the Observatory. Like Al-Kubeir, Treimsa is a majority Sunni village situated near Alawite hamlets.

Assad belongs to the Alawite community -- an offshoot of Shiite Islam -- although most Syrians are Sunni.

If confirmed, the 150-person toll would exceed that of a massacre at Houla on May 25, when a pro-Assad militia and government forces were accused of killing at least 108 people.

US Ambassador to the UN Susan Rice said in a Twitter message that the killings "dramatically illustrate the need for binding measures on Syria" by the Security Council.

The council's talks have so far failed to narrow differences.

Britain, France, the United States, Germany and Portugal have proposed a resolution that would give Assad 10 days to stop the use of heavy weapons, in line with the Annan plan, or face sanctions. The western nations only want to give UNSMIS a new 45-day mandate.

Russia is proposing a rival resolution that renews the mandate of the UN mission in Syria, which ends on July 20, for 90 days and has said sanctions are unacceptable.

The Syrian Observatory reported at least 75 people killed across Syria on Friday -- 25 civilians, 24 soldiers and 26 rebels. The watchdog has said more than 17,000 people have been killed since the uprising began in March 2011.