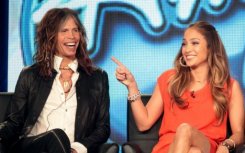 Lopez had hinted as much on Thursday, when the Aerosmith frontman revealed that he was leaving the Fox show, which has struggled notably against new NBC rival "The Voice."

"I honestly feel like the time has come... to get back to doing the other things that I do, that I put on hold," Lopez said Friday on "American Idol" host Ryan Seacrest's radio show.

"I had put it on hold because I love 'Idol' so much. You have a lot of other responsibilities and other things you want to do."

Tyler and Lopez became judges on the hit talent show in September 2010, joining record producer Randy Jackson, who has been on the show since it launched.

Tyler said Thursday he was returning to his first love -- rock music.

"I strayed from my first love, AEROSMITH, and I'm back -- but instead of begging on my hands and knees, I've got two fists in the air and I'm kicking the door open with my band," he said in a statement.

"American Idol," which has aired for 11 seasons, has struggled with falling ratings, and was thrown into disarray by the departure of judges Simon Cowell, Ellen DeGeneres and Kara DioGuardi two years ago.

"The Voice" premiered on NBC last year and was an immediate hit, with judges Christina Aguilera, Cee Lo Green, Adam Levine and Blake Shelton. It has been renewed for a third season.

Can the US and Russia find a diplomatic 'off-ramp' on Ukraine?