Uzbek man jailed in US over plot to kill Obama
World

Uzbek man jailed in US over plot to kill Obama

A US federal judge sentenced an Uzbek man to more than 15 years in prison on terror and weapons charges for threatening to kill US President Barack Obama, US prosecutors said. 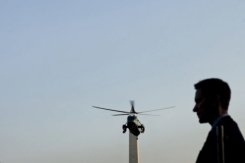 A Secret Service agent stands guard as Marine One passes the Washington monument while approaching the White House. A US federal judge sentenced an Uzbek man to more than 15 years in prison on terror and weapons charges for threatening to kill US President Barack Obama, US prosecutors said.

Ulugbek Kodirov, 22, was sentenced to 15 years and eight months in prison for providing material support to terrorism, threatening to kill the president and possession of a firearm by an illegal alien, they said in a statement.

Kodirov, who entered the United States on a valid visa but later was in the country illegally, will be deported to Uzbekistan after he completes the sentence, the statement said.

"This case has a happy ending -- Kodirov is going to prison for more than 15 years and no one was hurt," said US Attorney Joyce White Vance.

Kodirov was arrested on July 13, 2011, at a motel in Alabama, after attempting to buy explosives and guns from an undercover agent. He pleaded guilty to all charges in February.

As part of his plea agreement with prosecutors, Kodirov admitted he had communicated with a suspected member of the Islamic Movement of Uzbekistan identified only as "the Emir" who suggested that he kill Obama.

The US State Department lists the Islamic Movement of Uzbekistan as a foreign terrorist organization.

"This case demonstrates the continuing threat posed by violent extremists in this country and how law enforcement works together to neutralize such plots," said the DOJ's assistant attorney general for National Security, Lisa Monaco.