General Manaf Tlass, a key military defector and ex-ally of Bashar al-Assad, called Tuesday for a political transition in Syria and condemned military attacks on civilians in a statement sent to AFP. 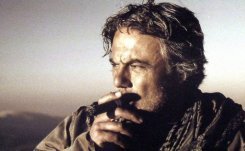 A reproduction of an undated picture shows top Syrian General Munaf Tlass smoking a cigar in an undisclosed location. Tlass, a key defector from the regime of Syria's Bashar al-Assad, said in a statement sent to AFP Tuesday that he was in Paris and called for a "constructive transition" in his country.

In his first statement to the media since his defection was announced on July 6, Tlass said the regime held "the majority of responsibility" for the crisis and confirmed he was in Paris.

As heavy fighting raged in the Syrian capital Damascus, Tlass expressed anger that security forces were being used to suppress dissent.

"I sincerely hope that the blood stops flowing and that the country emerges from the crisis through a phase of constructive transition that guarantees Syria its unity, stability and security, as well as the aspirations of its people," Tlass said.

"I am ready like any other Syrian, with no other ambition, to fulfill my civic duty to contribute to a better future for my country, as much as I can, and like all those... who have already made many sacrifices," he said.

However, he did not specifically call for Assad to step down or say that he was joining the Syrian opposition. French officials had earlier said he was "in contact" with the opposition.

Tlass, 48, is the highest-ranking military officer to have abandoned the Syrian regime, as a member of the inner circle of power and a childhood friend of Assad.

"I cannot but express my anger and pain at seeing the army pushed to carry out a fight that is against its principles, a fight directed by security forces and in which the people, including the soldiers, are the victims," he said.

"When I took a position and refused to take part in the security action, I was isolated, accused and even labeled a traitor," he said.

"But my conscience, my deep conviction, pushed me to challenge this destructive action and to distance myself."

A general in the elite Republican Guard charged with protecting the regime, Tlass is the son of former defence minister Mustafa Tlass, a close friend of Assad's late father and predecessor, Hafez.

Several sources had said earlier that he was believed to be in Paris, where much of the Syrian political opposition is based and some of his family live.

His defection had been hailed in Western capitals as a key setback for the regime while the opposition umbrella group the Syrian National Council had called it a "enormous blow" to Assad.

He had faced criticism from Syria's armed rebels who said Tlass and his 80-year-old father, who lives in Paris, needed to clarify "their role since the start of the revolution".

In his statement, Tlass said "the complicated circumstances of my exit from Syria" explained his silence since the defection was announced and that he had sought to oppose the regime's crackdown.

"Faithful to my country and my beliefs, I always tried over the past 18 months to do my duty, unfortunately without success. I was not complacent with the regime, I did not accept nor participate in an action that led the country to its current tragic situation," he said.