Drilling of the seabed off Antarctica has revealed that rainforest grew on the frozen continent 52 million years ago, scientists said Thursday, warning it could be ice-free again within decades. 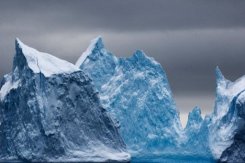 Drilling of the seabed off Antarctica has revealed that rainforest grew on the frozen continent 52 million years ago, scientists said Thursday, warning it could be ice-free again within decades.

The study of sediment cores drilled from the ocean floor off Antarctica's east coast revealed fossil pollens that had come from a "near-tropical" forest covering the continent in the Eocene period, 34-56 million years ago.

Kevin Welsh, an Australian scientist who travelled on the 2010 expedition, said analysis of temperature-sensitive molecules in the cores had showed it was "very warm" 52 million years ago, measuring about 20 degrees Celsius (68 F).

"There were forests existing on the land, there wouldn't have been any ice, it would have been very warm," Welsh told AFP of the study, published in the journal Nature.

"It's quite surprising, because obviously our image of Antarctica is that it's very cold and full of ice."

Welsh said higher levels of carbon dioxide in the atmosphere were thought to be the major driver of the heat and ice-free conditions on Antarctica, with CO2 estimates of anywhere between 990 to "a couple of thousand" parts per million.

CO2 is presently estimated at about 395ppm, and Welsh said the most extreme predictions by the Intergovernmental Panel on Climate Change (IPCC) would see ice again receding on Antarctica "by the end of the century".

"It's difficult to say, because that's really controlled by people's and governments' actions," said Welsh, a paleoclimatologist from the University of Queensland. "It really depends on how emissions go in the future."

Welsh described the findings as "very significant" in understanding future climate change, particularly given how important Antarctica and the "very large" volume of water stored on its surface would be for the entire planet.

"It shows that if we go through periods of higher CO2 in the atmosphere it's very likely that there will be dramatic changes on these very important areas of the globe where ice currently exists," he said.

"If we were to lose a lot of ice from Antarctica then we're going to see a dramatic change in sea level all around the planet."

Even a few metres of sea level rise would inundate "large portions of the habitable land around coasts of many major countries and low-lying regions", he added.

The ice on east Antarctica is 3-4 kilometres (1.9-25 miles) thick, and is thought to have formed about 34 million years ago.

Welsh said there would also be major impacts to global temperatures were the ice to recede, because it is an integral cooling mechanism for the planet, regulating the temperature by reflecting the sun's energy into space.

Biden speaks with wife of basketball star detained in Russia